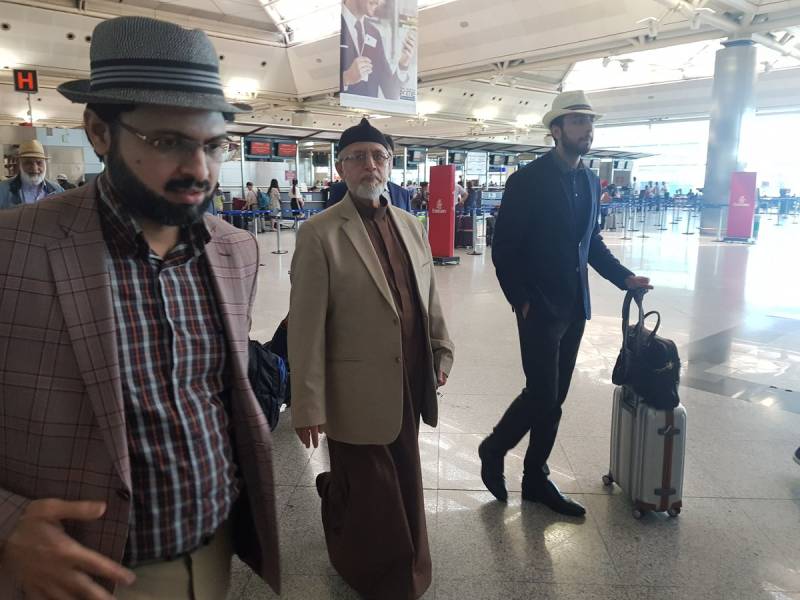 The Canada-based cleric will oversee his party’s preparation for the forthcoming general elections and to maneuver the political landscape in his favour by forging alliances.

Before leaving from Istanbul, he criticised the parliament for “transgressing by removing sections on the nomination forms pertaining to integrity that are enshrined in articles 62 & 63 of the constitution”.

The parliament transgressed by removing sections on the nomination forms pertaining to integrity that are enshrined in articles 62 & 63 of the constitution. We welcome the judicial decision reinstating these sections on the forms.

These disgraceful politicians who see politics as a means to earn fortunes are on the verge of erasing articles 62 & 63 from the constitution. They are an embarrassment to democracy and the honour of the parliament.

“We welcome the judicial decision reinstating these sections on the forms,” he wrote on Twitter.

According to the party sources, the PAT is already negotiating with Pakistan People’s Party and the PML-Q and exploring the possibility of contesting elections on a joint election symbol in Punjab.

PAT spokesman Noorullah Siddiqui detailed that the PPP can contest on whatever symbol it wants in Sindh or any other province, but PAT is asking it to field joint candidates on a joint symbol and the PPP is listening.

Moreover, he explained that the PML-Q was striving hard to gather all offshoots of Muslim Leagues and some other religious groups for making an umbrella alliance.

“The talks are inching towards consensus and that is why the PAT chief is arriving,” he added.

ISLAMABAD - The chief of Pakistan Awami Tehreek, Tahirul Qadri is set to return to Pakistan on Sunday for overseeing ...

When asked about the possible alliance with the PTI, he said the party has grown too big, or at least it perceives itself to be, to seek alliance, even seat adjustment.

When asked about the previous tours of the PAT chief, the official tried to water down the controversy and said that the PAT had two major demands: making the Justice Baqar Najfi report public and justice for Model Town massacre.

He continued that refining and reforming the electoral system to ensure transparent and fair elections was a motive of the party.

“It is more of a general issue, and the party and its chief, would continue to agitate it softly through talk shows and through other means,” he said and clarified that there is nothing to protest about.

Regarding the stay of Dr Qadri in Pakistan, Noorullah said it all depends how political situation matures in the next two months.

He revealed that if it is only seat adjustments and all parties contest on their individual symbols, the PAT chief might decide to leave early.

“The PAT is going to put up its own candidates on selective seats and cooperate with others on the rest of the seats,” he concluded.