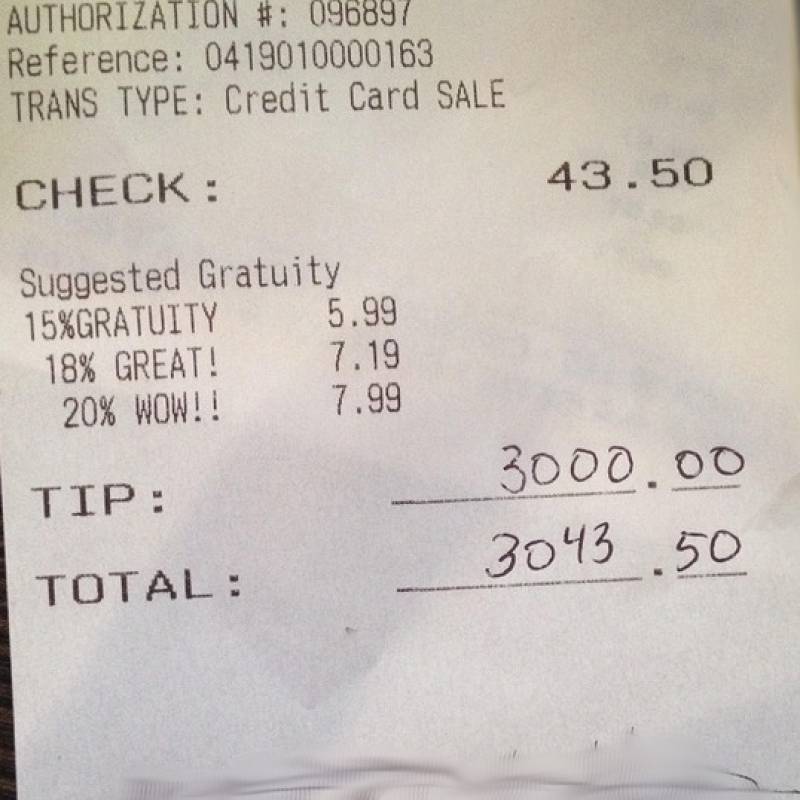 NEW YORK (Web Desk) - A diner, who left a $3,000 tip for a New York waitress so she wouldn't be evicted, said he was inspired by a tragic event that befell his former teacher.

The diner, who asked only to be identified as Mike, left the nearly 6,800 percent tip on his $43.50 tab for the waitress who had frequently served him at the Times Square restaurant, which also did not want to be identified.

“This woman had been serving us for almost a year now. She's a lovely individual, and she talked about how she was served an eviction notice last month," Mike told ABC News. "I just had also been constantly thinking about for quite some time my teacher's project and this foundation, and I thought it was an appropriate time."

Mike left a note for the waitress explaining he was inspired by a former teacher's tragedy.

"Thank you for your kindness and humility.  My teacher in middle school had such a difficult experience a few years ago which has sparked me to do this.  My only requirements are:

Thank you for being around for all of my shows on and off Broadway.  I hope that someday someone gives as much love and happiness into the world as you do."

Mike's eighth grade teacher, Richard Specht of Sound Beach, NY, founded ReesSpechtLife.com after his 22-month-old son, Richard Edwin-Ehmer "Rees" Specht, drowned in the family's backyard two days before Hurricane Sandy struck in the fall of 2012. The website encourages readers to pay tribute to Rees by performing acts of kindness and "paying it forward."

Specht said he was honoured when the waitress contacted him to tell him about the tip.

"I saw the $3,000 tip and it didn't register at first because you know people share acts of kindness with us from all over," Specht told WPIX-TV. "This young man used to come up to my room to talk with me and I remember many of our conversations that we had over the course of that year... to think that someone I had a decade ago would honor my little boy or even remember his 8th grade science teacher in such a way blows me away."