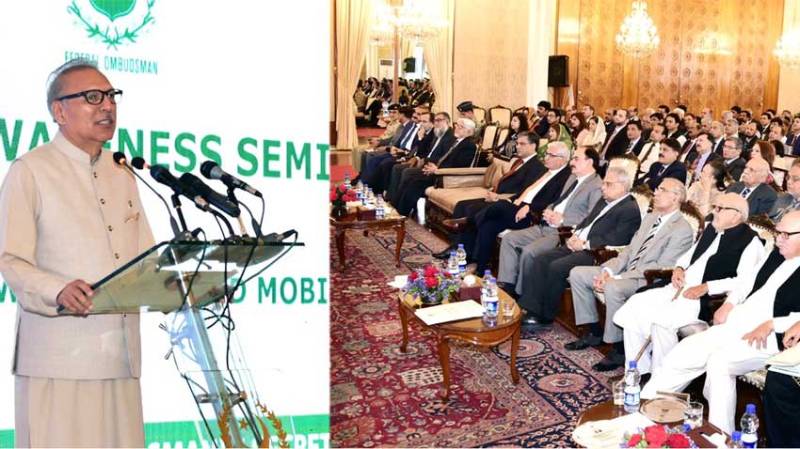 Addressing the launching ceremony, the president said it is prime responsibility of the government to provide justice to masses.

Acknowledging speedy redressal of public grievances by the office of Federal Ombudsman, President Alvi said the institution should publicize its good decisions through social and mainstream media.

He added that social media has linked the seller and buyer which has rapidly improved trade and commerce all around the world. "It is responsibility of every individual to project positive image of the country," Dr Alvi said while sharing that he has suggested Council of Islamic Ideology to use mosques to address social issues of the society.

Earlier in his welcome note, Wafaqi Mohtasib (Federal Ombudsman) Syed Tahir Shahbaz said as per the direction of the President this year has been dedicated to awareness and enhancement of Ombudsman's outreach.

He said mobile app has also been launched on the direction of President to make it easy for users to register a complaint and then track it.

Last year more than 78 thousand complaints were decided and, according to the federal ombudsman, this mobile app will facilitate more people in approaching the office.

On the occasion, the President also inaugurated revamped website of the office of Federal Ombudsman.

A documentary covering various functions and procedures of the Federal Ombudsman was also shown to the audience.