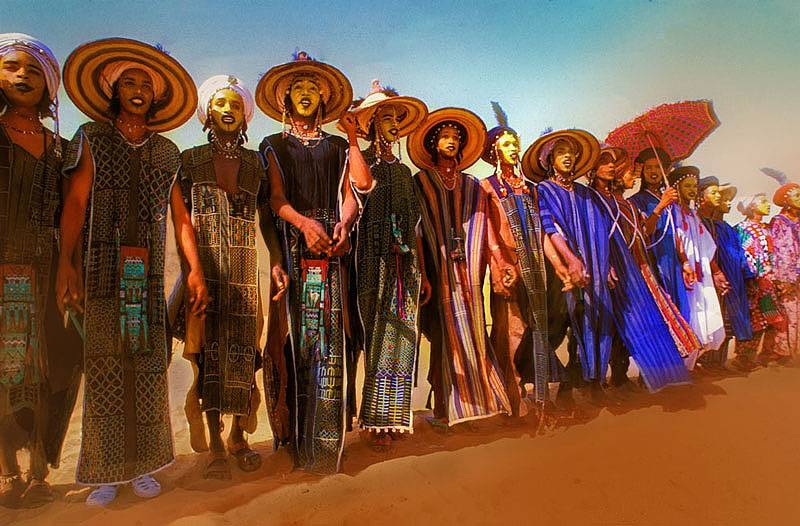 NIGER (Web Desk) - The beauty standards and criteria aren’t all that different from your typical beauty pageant, except in the nomadic Wodaabe tribe of Niger, it’s the girls who get to judge the boys. If you think women are high maintenance, meet the tribesmen who spend an obscene amount of time, energy and money to get ready. Their costumes have taken a year in the making; colourfully embroidered and decorated with shiny objects and attention-grabbing accessories. Yellow ochre and kohl is used as make-up to contour the face, elongate the nose and lighten the skin. When they’re finally ready, the “pageant” can begin and the men, ancient warriors by tradition, begin parading, dancing and singing in the desert sun to impress tribeswomen– who also happen to be the contest’s judges. The ladies are looking for the most beautiful face, the tallest and most graceful, the best dressed, flashing the brightest eyes and the biggest, whitest smile in the line up.

The Wodaabe tribe are said to value three things in life the most: beauty, cattle and family. They are a fiercely loyal people within their clans, cattle-herders by trade, supplying meat for hundreds of villagers, town and cities from the shores of Lake Chad to the Atlantic coast of Senegal– and they’re also said to be “obsessively vain”. At the end of the rainy season in September, before their annual migration begins, the nomadic clans gather in the desert with their cattle to celebrate, but also to compete. The typically week-long festival known as Gerewol, is a rich cultural ceremony of courtship which involves clan-meetings, camel racing, dancing, singing, marriage bartering, but most importantly, the contest for the best looking man of the tribe. The Wodaabe women, considered to be the most beautiful in Western Africa, spectate and judge from a distance, pretending to be shy, all the while, sizing up the most desirable contestant to be crowned the next “Mister Wodaabe”.