Doctor chops off baby’s head during delivery in India, ties it with rope 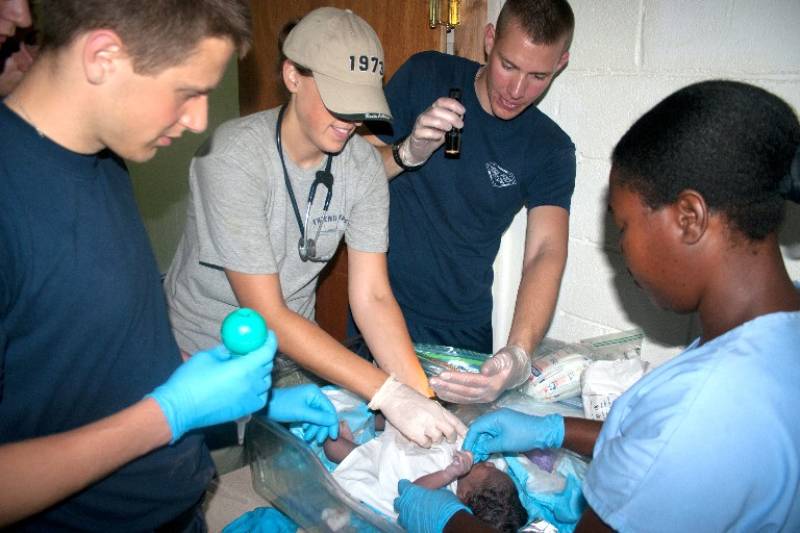 RAMPUR (Web Desk) - A gynaecologist at the district hospital here could not have used a cruder method to deliver a baby.

As the legs emerged first, the doctor tied the infant's limb to a rope and attempted to extract it from the womb.

But the delicate body could not bear the wrench, and the birth occurred with the head still stuck in the mother's body.

The headless infant was discarded in a bin, and the doctor proceeded to surgically remove the stuck head.

An FIR has been registered in the matter against Dr Tayyaba Iqbal and the nurse on duty at the time, identified only by her first name, Madhuri.

A large gathering of people protested the cruelty outside the hospital on Tuesday as news spread.

She had been admitted on Saturday for delivery of her baby. She went into labour on Sunday evening, and the doctor on duty found it was breech birth - with the legs emerging first.

The doctor attempted to deliver the baby by tying its foot with a cord and pulling." The infant's head remained in the womb, the doctor explained.

Pant said soon as she was informed of the incident, arrangements were made to surgically remove the baby's head from the woman's body, adding she was at a loss to explain why the doctor on duty had to adopt such a bizarre procedure for delivery.

The patient's sister-in-law told TOI, "The doctor and nurse are both absconding now. We were shocked to see her in a pool of blood, the baby headless."

As a large crowd gathered in protest, SP Sadhna Goswami said the doctor and nurse would soon be traced, and the law would take its course so the patient's family would be given justice.

Late Tuesday, police managed to arrest Iqbal and the nurse.

A case under Sections 304 (culpable homicide not amounting to murder) and 315 (act done with intent to prevent child being born alive or to cause it to die after birth) of IPC was then lodged.

SHO Kothwali police station Naresh Pal Singh said the doctor and nurse would be presented before the court of the chief judicial magistrate, Rampur, on Wednesday.