US diplomat pushes for enhanced business ties on Sialkot visit 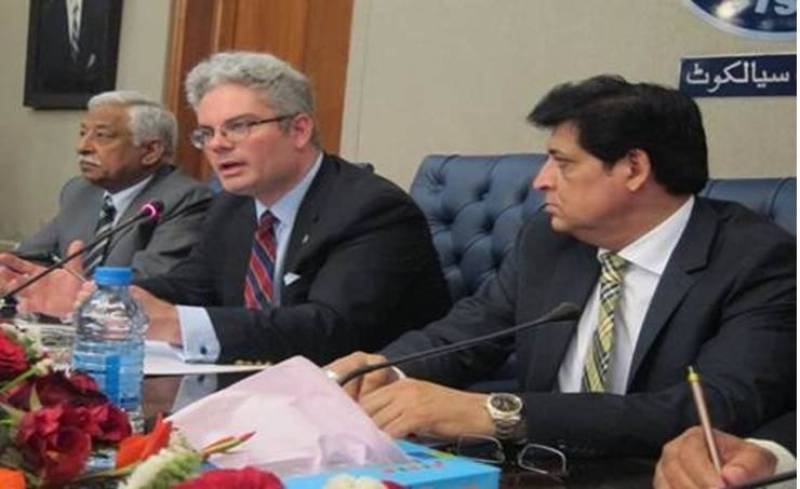 LAHORE (Staff Report) – Advancing US interests in the economic sector for a stable, secure, and prosperous Pakistan, US Consul General in Lahore, Zachary Harkenrider, paid a visit to Sialkot the other day.

Before delivering an address on “enhancing US-Pakistan business ties” at the Sialkot Chamber of Commerce and Industry, the US diplomat headed into a meeting with SCCI President Fazal Gillani.

Harkenrider meanwhile, in his address to a Lahore Chamber of Commerce & Industry meeting on Friday, said there is a great potential for stronger economic and trade ties between the United States and Pakistan. He held the view that the two countries needed to further enhance bilateral trade in the future.

The diplomat said a large part of US assistance to Pakistan was focused on the energy sector. He reiterated that the US government was committed to solve the economic challenges faced by Pakistan.

He said it was a happy sign that the private sector in Pakistan was doing well despite a number of challenges.

Speaking on the occasion, LCCI President Ijaz A Mumtaz said the US Consulate was playing commendable role in developing working relations with the various segments of society in general and business community in particular.

He urged the US Consulate to start visa processing facility at the Lahore consulate.

Mumtaz said the US has been a very important trading partner of Pakistan since decades. According to him, Pakistan exported to the tune of $3.75 billion and imported goods worth $1.67 billion from the US in 2013.

Mumtaz further said there were a few countries with which Pakistan experienced favourable balance of trade.

USA tops this list with a total worth of $2.1 billion, he added.

He said that visits of delegations from the US to Pakistan on reciprocal basis could play an important role to increase the mutual trade.

Appreciating the role of USAID in Pakistan, he said it can also be taken as a model by the US based investors.

Transfer of technology was another way to improve the current situation, he said, adding the interaction of commerce chambers of the two countries could also be instrumental in this respect.