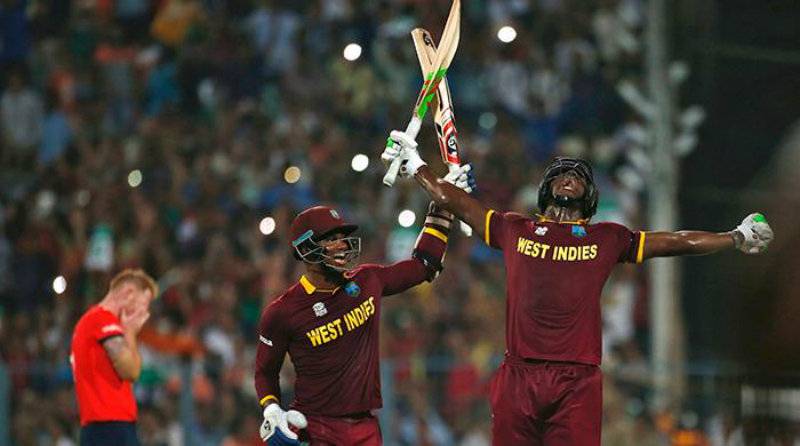 Braithwaite, who also grabbed 3 wickets for 23, scored 34 crucial runs in 23 balls and remained unbeaten, hitting 4 sixes and a four.

Marlon Samuels made a 92-ball 85 to set the stage for Braithwaite to finish it off in style for the Caribbean team.

Dwayne Bravo played a cautious innings of 25 off 53 balls after claiming 3 wickets for 37 for Windies.

Joe Root scored 54 runs as England set a moderate target of 156 runs for the fiery West Indians in the final of the sixth World Twenty20 at the Eden Gardens.

Jos Buttler 36 and Willey 21 were other notable contributors for England. Root's second fifty of the tournament helped the 2010 champions to recover from a poor start but England could not capitalise on the platform and settled for a modest total against the 2012 winners.

After West Indies skipper Darren Sammy won the toss and elected to field, leg-spinner Samuel Badree claimed two early wickets and collaborated for a third to reduce England to 23-3 inside five overs.

Badree pegged back Jason Roy´s leg-stump with the second ball of the match, took a catch to send back Alex Hales and dismissed Eoin Morgan in the fifth over to deny England a strong start.

Root bailed out England, adding 61 runs with Jos Buttler (36) who hit left-arm spinner Sulieman Benn for back-to-back sixes before holing out in the deep.

Dwayne Bravo (3-37) struck twice in the 14th over, dismissing Ben Stokes and Moeen Ali, and Root perished in the next over, trying to scoop a Carlos Brathwaite (3-23) delivery.

Both sides fielded unchanged squads for the match which will see one of them becoming the first team to win a second World Twenty20 title.