Are the new iPad Pro’s faster than the MacBooks 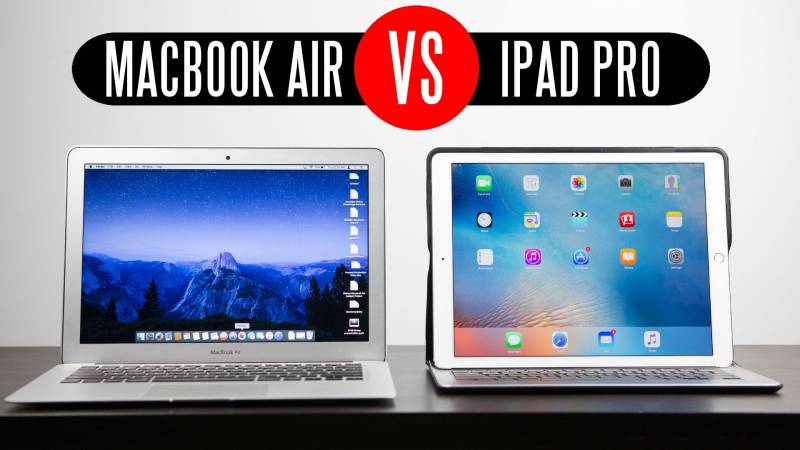 Every June, Apple shakes up the industry in its own way. On June 9, the company announced new iMacs, iMac Pros, iOS 11, MacOS High Sierra, the HomePod. The iPad Pro happened to be the most eye-catching. Apple updated the iPad Pro line-up and announced three months sooner than usual, the technology observers are guessing as to what surprise the September keynote event holds.

So here is what makes iPad Pro line-up stands out: the 9.7” iPad pro-2016 is now 10.5 in the same body (Bezels are shrunken), whereas no screen size change for the 12.9” iPad. Coming this fall is the new iOS, armed with lots of features: a new file manager, new multi-tasking features, new layout (which has been heavily inspired by jailbreaks) to name a few. Apps can hover over apps in small windows and some new software optimisation allows for better RAM management, meaning that apps can run longer in the background and won’t restart at re-opening them. Apple has also changed the dock as well which changes as you work. “Intelligently suggested apps — like ones you opened recently and the last one you were using on your iPhone or Mac — appear on the right side of the Dock,” boasts a company official.

The new displays are twice as fast with a new technology Apple calls ‘ProMotion’, meaning that the new iPads detect inputs twice as fast through both, fingers and Apple pencil, which allows for better drawing and faster usage in general.

Speaking of usage, GeekBench tests show that the new iPads may be faster than the Retina MacBooks 2016 and in some cases, the 2017 models as well. Of course, the iPad pro’s can never beat the RMBPs (Retina MacBook Pro’s) in single core performance, but they are definitely better at multi-core performance. Some points to note though are that the RMBPs have higher resolution screens, whereas the iPads have a comparatively lower screen, which hinders the fairness of the test.

The Scores are a combination of integer, floating-point, and memory performance. 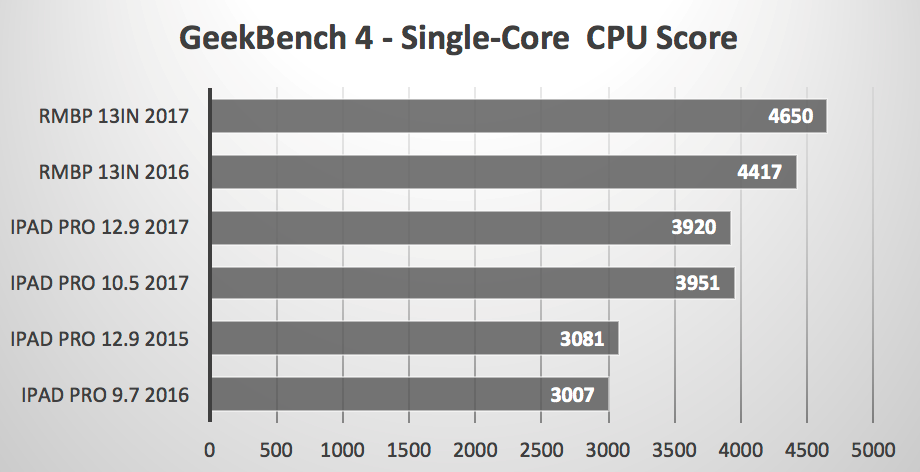 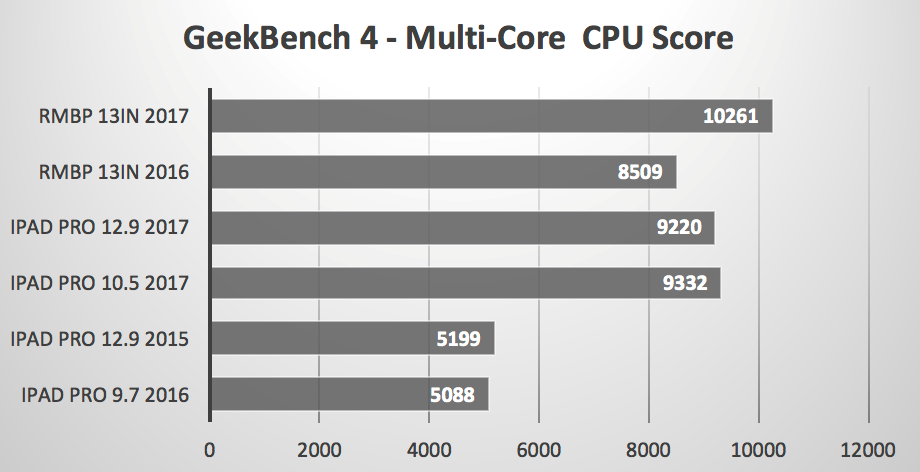 This is a GPU Compute test (Higher is better) 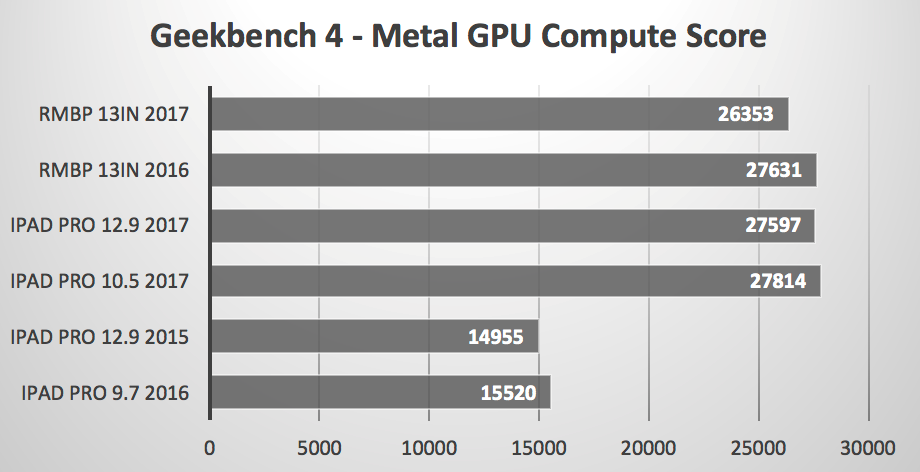 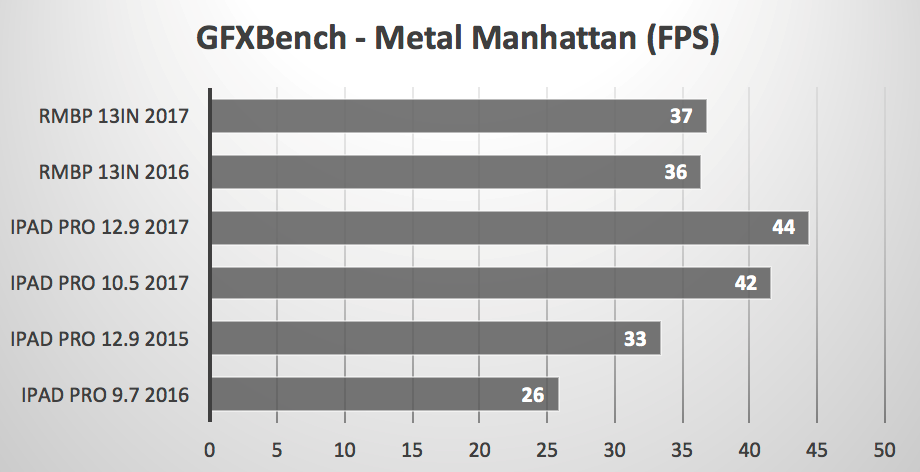 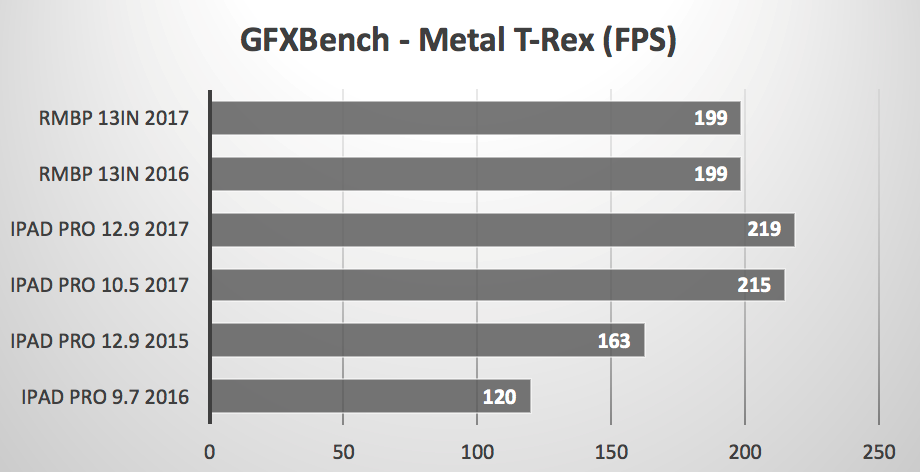 These benchmarks raise a few questions:

Should you upgrade?  The answer is yes. If you own one of the older generation iPads and want something better, then sure do upgrade. However the new iPad pro is not suitable for children, the lighter $350 iPads are more than enough. iPads age very well though, and if you feel comfortable with your iPad, the choice is up to you. This is definitely the fastest tablet on the market.

Can the iPad pro be used as the main computer? The answer is no for an average user. If you are someone who uses third party Apps or have video editing or coding etc, the iPad is definitely not for you. But if you have lighter tasks, such as web browsing, mobile gaming, watching videos etc, the iPad could be the device for you.

Can the iPad pro replace the RMBPs? The answer is absolutely no. MacBooks run full programs and that, the iPad cannot do. Surely, these iPad pros will be excellent for normal iOS usage but it cannot replace the MacBooks. The iOS is simply not powerful enough to be used as a main OS.

How good is it for an artist? If you are an artist, chances are that you probably own a professional drawing tablet. Thus, you do not need the new iPad pro. However, if you are a beginner at art and want a really good experience, the iPad could be a good contender out of all the options. The new display and the apple pencil are excellent for art and design.