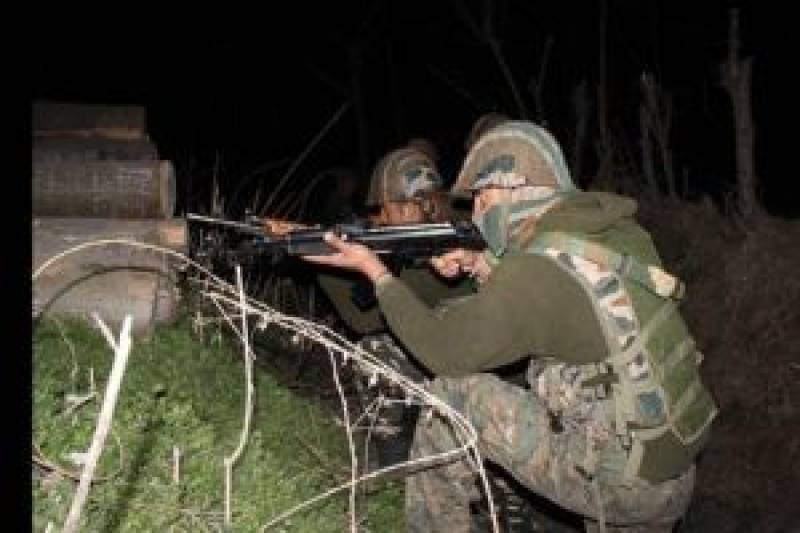 SRINAGAR - Two senior officers of Indian army among five security personnel were killed on Sunday in Kupwara district of occupied Jammu and Kashmir during a clash with freedom fighters.

The incident occurred in Handawar area amidst a report that claimed that Indian forces have martyred 20 youth in occupied territory in eight different cordon and search operations in the past two weeks.

The killed troops has been identified as Colonel Ashutosh Sharma, Major Anuj Sood, Naik Rajesh Kumar and Lance Naik Dinesh from the 21 Rashtriya Rifles while a police officer also with them.

It is worth mentioning here that 8 Indian Army commandos were killed during an encounter in Zurhama, Keran area of Kupwara district on  April 5-6, while four CRPF personnel were killed and several injured in an ambush at Noorbagh near Ahad Bab’s crossing in Sopore town on April 18, KMS reported.

Following is the timeline of Indian forces action against Kashmiris in past two weeks;

On April 17, Indian troops martyred two Kashmiri youth in an operation at Dairoo-Keegam in Shopian and the forces’ personnel took their bodies to a far off Baramula village for burial.

On April 22, four youth, hailing from Shopian and Pulwama villages, were killed in a CASO at Melhoora village in Zainapora area of Shopian and their bodies were too taken by police to Ganderbal for burial.

On April 24, Indian forces martyred two youth in a cordon and search operation in Heri-Kharipora village of Frisal in Yaripora, Kulgam. The bodies of the duo hailing from Ashmuji and Bugam villages of Kulgam were also taken by police to a far off Baramulla village for burial.

On April 25, three youth were martyred during an operation by Indian forces’ personnel in Goripora, Barsoo village of Awantipora police district. Their bodies were taken by police to Ganderbal for burial.

On evening of April 26, Indian police martyred four youth including an engineering graduate in a CASO in Achthal-Guddar village of Kulgam district.

On April 27, Indian troops martyred three youth in Lower-Munda Qazigund area of Islamabad town in the police jurisdiction of Kulgam. All of them were from Kulgam villages. Their bodies were taken by police to Baramulla for burial.

As many as 14 civilians were injured when an unexploded device suddenly went off from the rubble of the damaged houses.

On May 2, two youth were martyred in Pulwama town. Initial reports suggest that the duo hailed from the same district. Their bodies, a police official said, will be taken to a Baramulla village for burial.