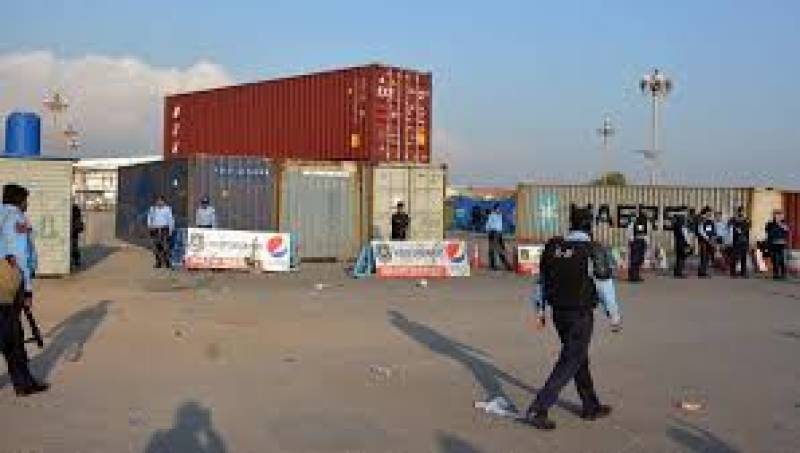 ISLAMABAD - Security in Pakistan’s federal capital has been beefed up as instructions have been issued by law enforcers to prepare and get ready for any untoward situation after the Jamiat Ulema-e-Islam- Fazl (JUI-F) hinted at moving towards D-Chowk and breach the security zone.

According to media details, the authorities have devised a strategy to deploy an extra force of over 9,000 trained personnel have been deployed at different locations marked as sensitive points to resist in case the marchers advance towards sensitive Red Zone.

Interior Minister Ejaz Shah chaired a meeting attended by representatives of the army and Rangers, and the Islamabad chief commissioner and the police chief.

The government has strictly warned the demonstrators that if they violate the agreement, signed between the government’s negotiation committee and the Rehbar Committee, stern action would be taken against them in accordance with the Law.

The administration is likely to reinforce more personnel of anti-riot police and paramilitary force borrowed from different provinces and divisions to tackle the prevailing security situation in Islamabad.

“The routine police force could be replaced with revitalised heavily equipped personnel of military and paramilitary forces and they may be deployed in and around the Red Zone, especially in Diplomatic Enclave,” Geo TV reported.

As a counter-strategy, law enforcement agencies will engage the mob on their way to sensitive zone as the mob leaves the venue and start marching towards D-Chowk.

Lines will be drawn to halt and disperse the people heading towards the Red Zone, first at Peshawar Morr second at the bridge crossing Faisal Avenue (7th Avenue) and third at Kulsoom Plaza.

All paths leading towards Red Zone have been blocked with shipping containers and law enforcement agencies will use their all efforts and options, including water cannons to stop and disperse the mob someone kilometre away from Red Zone.

Earlier, addressing a press conference in Islamabad, Convener Rahbar Committee Akram Durrani said all representing leaders of opposition parties would discuss the said proposals with their top leadership which would follow the formulation of a future strategy.

The committee met amid serious concerns expressed by the senior leadership of the PML-N and PPP over JUI-F's plans of confrontation including the sit-in and marchers' movement towards D-Chowk.

Earlier on Friday, Jamiat Ulema-e-Islam-Fazal and major opposition parties formally kicked off protest sit-in in the federal capital and demanded the prime minister to step down within 48 hours for not running the country properly since holding the office after general elections 2018.