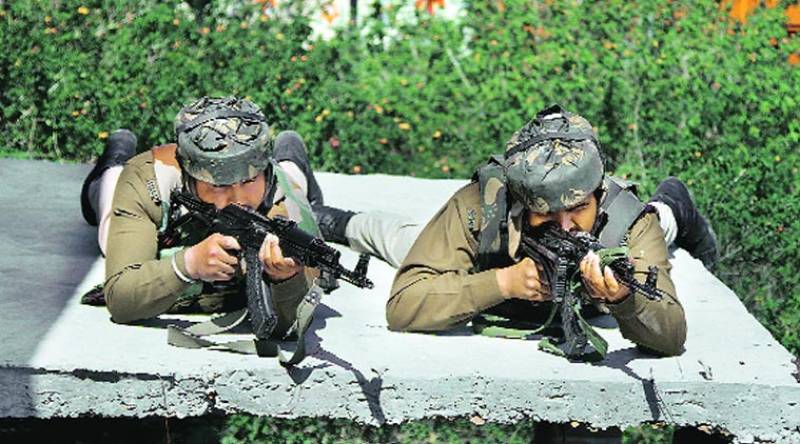 Maintaining its tradition of warmongering and sensationalisation of sensitive matters, media and experts from across the border following the Baramulla attack have unleashed plethora of baseless reports, flaring up the heightened tensions between the two Nuclear countries.

Last night, as the militants attacked the military camps in Baramulla in occupied Kashmir, killing at least one Indian soldier, the Indian media, without any investigations, promptly started running reports suggesting Pakistan's involvement in the attacks.

Read More:India takes no time to breathe or investigate before blaming Pakistan for Baramulla attack

Indian Defence expert Qamar Agha on Monday accused Pakistan of planting the attack and went on to threaten Pakistan for another attack after so-called 'surgical strikes' that India claimed it carried out to avenge for the Uri attack.

"Indian forced are prepared to battle such attacks and Pakistan have to pay the price for the Baramulla attack," Agha said.

"India would revenge for the attack," He added.

Another Indian Defence expert, SR Sinho accused ISI and Pakistani army for plotting the attack and demanded an investigation of the attack.

"The attack was a failure of ISI and Pakistani army, India will soon give a befitting response."

Earlier, Indian TV channel,  Zee News while describing the attack as a direct retaliation of the so called surgical strikes, came down to even more lower levels by giving threats to Pakistan live on TV.

#Baramulla terror attack teaches us that a simple #SurgicalStrike hasn't been successful. #Pakistan needs a deeper or a bypass surgery!

The latest baseless allegations come amid the escalated tensions between the two countries. India claimed it carried out Surgical strikes in a bid to retaliate for the Uri attack.

However, Pakistan dismissed the claim that Indian forces conducted a surgical strike on Pakistani side of Line of Control (LoC) in Azad Kashmir violating the 2003 ceasefire treaty.

Following the refusal from UN to confirm the Indian claims of ‘surgical strikes’, Pakistan Army on Saturday took independent journalists to the Line of Control (LoC) at Baghsir 20 kilometers from Bhimber to show the situation on ground.

“The area is such that infiltration by Indian forces is impossible and the area is monitored in such a way that even movement of wildlife does not go undetected,”Geo News’ Zarghoon Shah reported.

India claimed it filmed surgical strikes, but despite strong rebuttal and growing suspicion over its claims, India has yet to release any footage to substantiate its claims.

Dujarric said “The UN Military Observer Group in India and Pakistan (UNMOGIP) has not directly observed any firing across the LoC related to the latest incidents.”

When asked to explain how UNMOGIP can say it did not observe any firing even as India said it has conducted the surgical strikes, Dujarric repeated that UNMOGIP has not “directly observed” any of the firing.