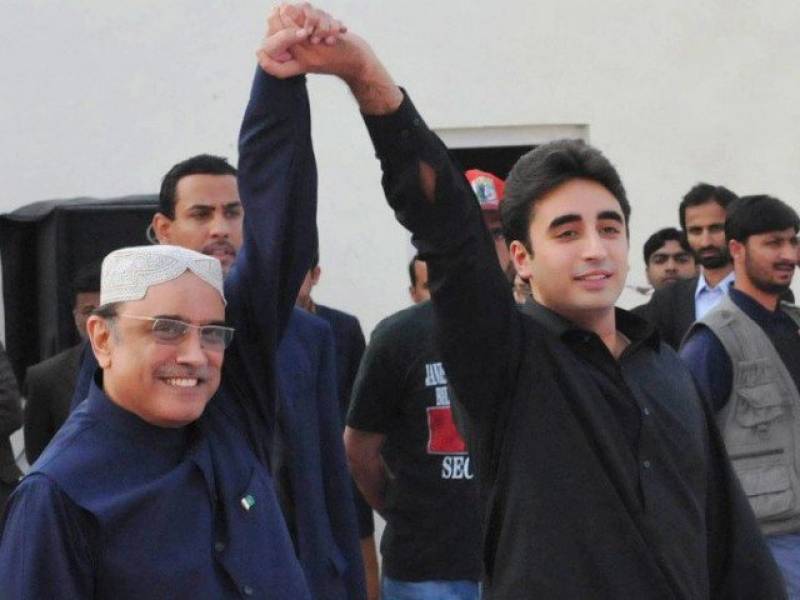 LARKANA - Former president Asif Ali Zardari and his son Bilawal Bhutto lashed out at Sharifs-led PML (N) government for "not doing much against terrorism during last two years", as the leaders of Pakistan People's Party gathered at Zulfikar Ali Bhutto's tomb in Garhi Khuda Bakhsh on Tuesday.

"The country (Pakistan) has made no progress against terrorism and is standing exactly where it was two years ago," claimed PPP co-chairperson Bilawal Bhutto while addressing a mammoth rally held in connection with 38th death anniversary of PPP founder.

Bilawal cautioned premier Nawaz Sharif about the dangerous game of undermining the federation by allocating huge funds for certain areas.

'Mian Sahib, you are playing a dangerous game. What do you want to prove by approving Rs37 billion gas project for an area' he said.

Bilawal in a categoric remark expressed that the incumbent government failed to implement National Action Plan and so it was needed to revive military courts.

The chairman alleged that the government was not serious about national security although it was concerned about Panama papers adding that the time has come to get rid of corrupt rulers.

Regarding the glamorous political life of PPP's founder Zulfikar Ali Bhutto, Bilawal maintained that it (April 4) was the darkest day in the history of Pakistan.

'On this day, the leader who defeated dictators was hanged' added Bilawal.

The 28-years-old chairman inquired about the 'so called' progress made during the PML-N's stint and added that billions of rupees were being spent in an extravagant fashion to advertise this progress.

Asif Ali Zardari expressed during his speech that PPP was not afraid of people who were targeting the party.

Zardari maintained that he was waiting for the Panama papers verdict to shelve out the future strategy claiming that his party was ready for elections even in 2017.