Pakistan stands with Kashmiris; warns India against any misadventure: NSC 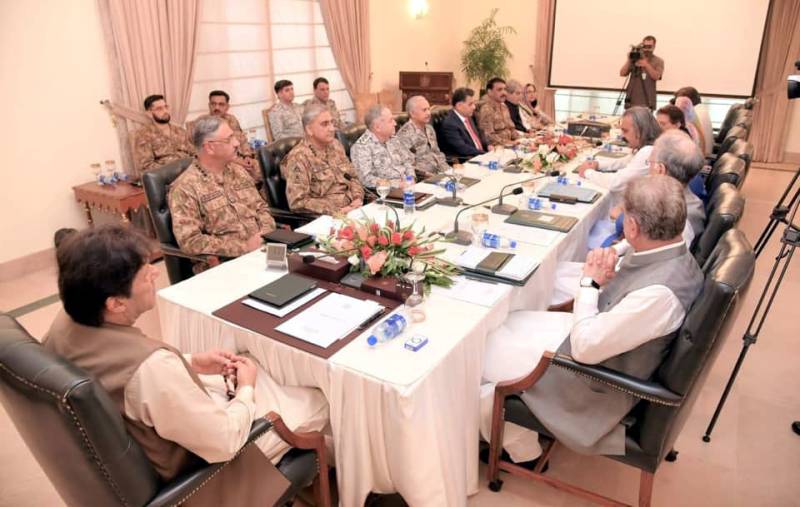 ISLAMABAD – Prime Minister Imran Khan has said Pakistan will always stand with Kashmiris and will not be deterred from its just stance based on United Nations Security Council's resolutions and aspirations of Kashmiri people.

Chairing the National Security Committee's meeting in Islamabad on Sunday, Khan said India is totally disregarding international obligations and its arrogance will only result in heightening the conflict dynamics in the region.

The Pakistani premier invited attention of world leaders and international bodies towards irresponsible, unilateral and irrational behaviour of Indian leadership.

He reaffirmed Pakistan's resolve to respond to any Indian misadventure or aggression with full support of the nation.

The meeting was briefed on India's deplorable suppression of people of the Occupied Kashmir, plans to use bogey of terrorism for political ends disregarding situation on ground, use of cluster munitions against civilians to provoke Pakistan and use of disinformation to confuse the real intent which is changing the demographic structure and the internationally recognised disputed status Occupied Kashmir.

The Forum noted with concern that the recent buildup of forces and their brutal use against an unarmed population is adding fuel to fire.

The forum strongly condemned such Indian strategy at this time when Pakistan and the international community are focused on resolving the Afghan conflict.

The recent Indian measures will increase the levels of violence and turn this area into a flashpoint and a destabilising factor in the midst of two strategically capable neighbouring countries.

The forum said Pakistan remains ready to defend itself against any Indian misadventure or aggression and will continue to provide all out diplomatic, moral and political support to the brave people of Indian Occupied Kashmir in their indigenous struggle to get justice and their right to self-determination in line with UNSC resolutions.

Prime Minister Azad Jammu and Kashmir assured the forum that Kashmiris on both sides of LoC are determined to withstand Indian hostilities and fully trust Pakistan to stand for them through thick and thin.

The meeting of the National Security Committee (NSC), an apex body of civilian and military leadership that controls the country’s nuclear weapons, was summoned in the wake of the Indian army's use of cluster ammunition in Azad Jammu and Kashmir (AJK) across the Line of Control (LoC) in violation of the Geneva Convention and international law.

India's fresh tactic over the past few days has caused multiple fatalities and injuries to several others, including minor children and women as well.

In a series of tweets on Sunday, Special Assistant to the Prime Minister on Information, Dr Firdous Ashiq Awan called on the political leadership of Pakistan to stand united and expose the "state terrorism by India in Indian-occupied Kashmir (IoK)" and the situation at the LoC.

RAWALPINDI - Pakistan's military has strongly rejected the allegations hurled by India about cross Line of Control ...

Pakistan military's media wing had earlier confirmed that on the night of July 30 and 31, Indian army targeted civilian population in the Neelum Valley through artillery using cluster ammunition and said the action was in violation of Geneva Convention.

"This is [a] violation of Geneva Convention and international humanitarian law," the military's media wing said.

JEDDAH – The Organization of Islamic Cooperation (OIC) has expressed deep concern about the deteriorating situation ...

A day earlier, India alleged Pakistan of cross-LoC action though the allegation was dubbed propaganda by Pakistan's military.