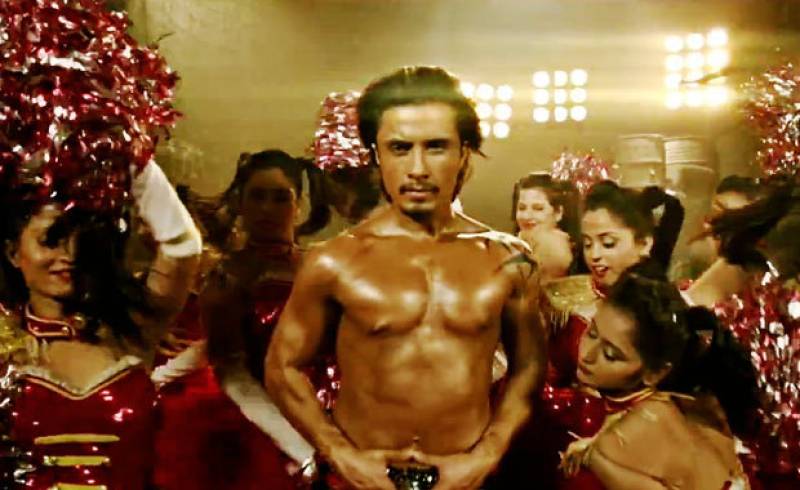 Lahore (web Desk) – Ali Zafar latest single Six Packs ab which is an item number  sung and shot for an upcoming movie Tere Bin Laden has been released today. The item number is a catchy one claiming to be the item song of the century starring one of the sexiest man of the Asia Ali Zafar, who made his Bollywood debut with Abhishek Sharma directed ‘Tere Bin Laden’ in 2010, returns for the sequel this year.

Ali Zafar has made a special appearance in this song, titled ‘Six Pack Abs,’ for which he had to bulk up. “I was given the task of composing, writing and singing the song. I had a lot of fun with it. It’s like an interesting take on the item number concept and the trend of acquiring abs to ensure a hit song,” the Pakistani singer-actor reveals cheekily, adding that he lent the track a vintage Bollywood feel with a modern hook and quirky lyrics. “Everybody who hears it for the first time bursts out laughing.”

Talking about his new muscular frame, the 35 years old says, “It was a strict schedule of three months to get into shape. I was off carbs and sugar and worked out twice a day before the shoot commenced. Aftere it got over, I binged on ice creams and parathas for a month.”

But why only a special appearance this time? “Tere Bin Laden and its makers are close to my heart. It was like we made history with not only the first film of our careers, which went onto garner a cult following,but also the fact it was probably the first venture where a Pakistani actor was cast as the protagonist, paving way for several others. When the sequel came underway, Abhishek and I was excited about it but as an actor I wanted to try something challenging. So he decided to just cast me in this interesting number.”

“I felt as an actor I’ve already enacted the role of a reporter in Tere Bin Laden and would want to try something challenging even if it’s a special part. In the west, you would often see even big actors like Brad Pitt or Johnny Depp feature in a surprisingly awkward yet interesting part. That’s the whole idea. Abhishek got excited and gave a really interesting angle to my role which obviously I can’t disclose right now but when you’ll watch the film you would understand why, when, how, what?” Pinkvilla quoted the actor as having said.

Ali Zafar, who was last seen in 2015  Bollywood film Kill Dil alongside Parineeti Chopra and Ranveer Singh, is now seen this item song of the century.