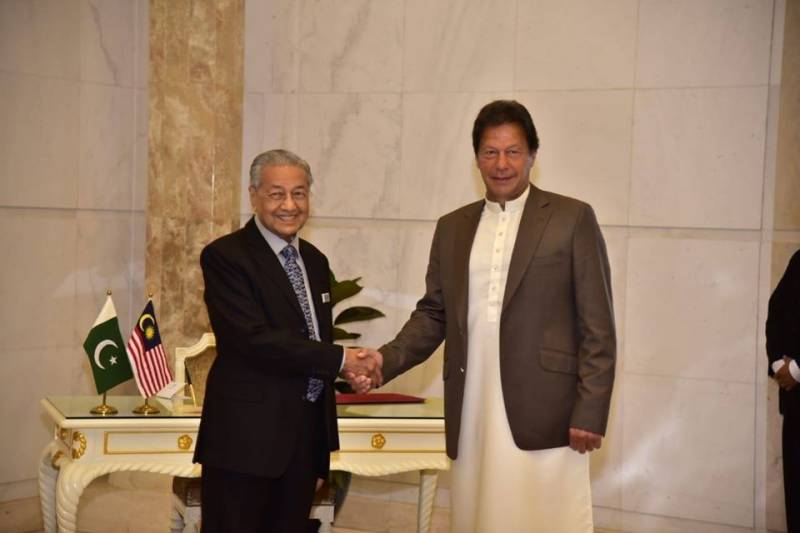 The prime minister during his stay held one-on-one meeting with Dr Mahathir Mohamad followed by delegation-level talks led by the two leaders and later addressed a joint press stakeout.

He spoke at International Affairs Forum on ‘Vision for Regional Peace and Security’ at International Institute of Advanced Islamic Studies, where he said that his government was making every effort to transform the country into a welfare state, based on principles of compassion and rule of law.

Imran Khan said numerous mafias in Pakistan, may it be political or those involved in price hike, did not want the country to make progress by exerting their undue use of power. "The reason why Pakistan could not achieve progress, despite its great God-given potential, was its journey without a proper vision. The nations without a vision, die as it is the key to keep them flourish and develop," he added.

Imran Khan emphasized that he wanted to emulate the ideologies of Pakistan’s founding and ideological fathers including Quaid-e-Azam Muhammad Ali Jinnah and Allama Iqbal who dreamt of a tolerant, just and welfare State of Medinah that embibed all modern principles of justice and compassion.

Imran Khan mentioned terrorism and religion had no linkage and pointed out that Muslims faced discriminatory treatment on basis on this misconception.

The Pakistani premier, along with Prime Minister Dr Mahathir witnessed the signing of an Extradition Treaty between the two countries and a Memorandum on Understanding between Pakistan-Tehreek-e-Insaf and the United Indigenous Party of Malaysia, Bersatu, in Putrajaya.

Both the prime ministers also agreed to explore trade and investment potential of their countries for a relationship based on strong economic cooperation. The two leaders at a joint press stake-out at PM Office Putrajaya spoke about the areas of collaboration, particularly trade, investment, defence, law enforcement, tourism and education.

PM Imran, who paid a two-day visit to Malaysia on the invitation of Prime Minister Mahathir, said the purpose of his visit was to “further strengthen ties between Pakistan and Malaysia in view of their tremendous future in trade and investment cooperation”.

He thanked Prime Minister Mahathir for speaking up for Kashmiris, who faced a curfew for last six months by the Indian government. “You have spoken for the justice for Kashmiris, for which we are thankful,” the prime minister said in reference to the categorical statements of Dr Mahathir on Kashmir from time to time that drew ire of India, cutting off of import of Malaysian palm oil.

“We noticed that India threatened Malaysia for supporting the Kashmir cause to cut their pal oil import, Pakistan will do its best to compensate for that,” he said.

Dr Mahathir termed the meeting with Imran Khan having “discussion on issues of common interest to open doors of opportunities for our people.”

“There is a new face of our relationship based on greater cooperation needed to meet the challenges of our time,” Mahathir said.

The two sides also agreed to increase exchange visits at all levels to set the tone of future course of bilateral relations.

Mahathir reaffirmed the importance of Malaysia and Pakistan’s closer economic partnership signed on November 8th, 2007 in Kuala Lumpur and expressed satisfaction on agreement for regular discussion to remove barriers in key areas and address the bilateral goods in balance.