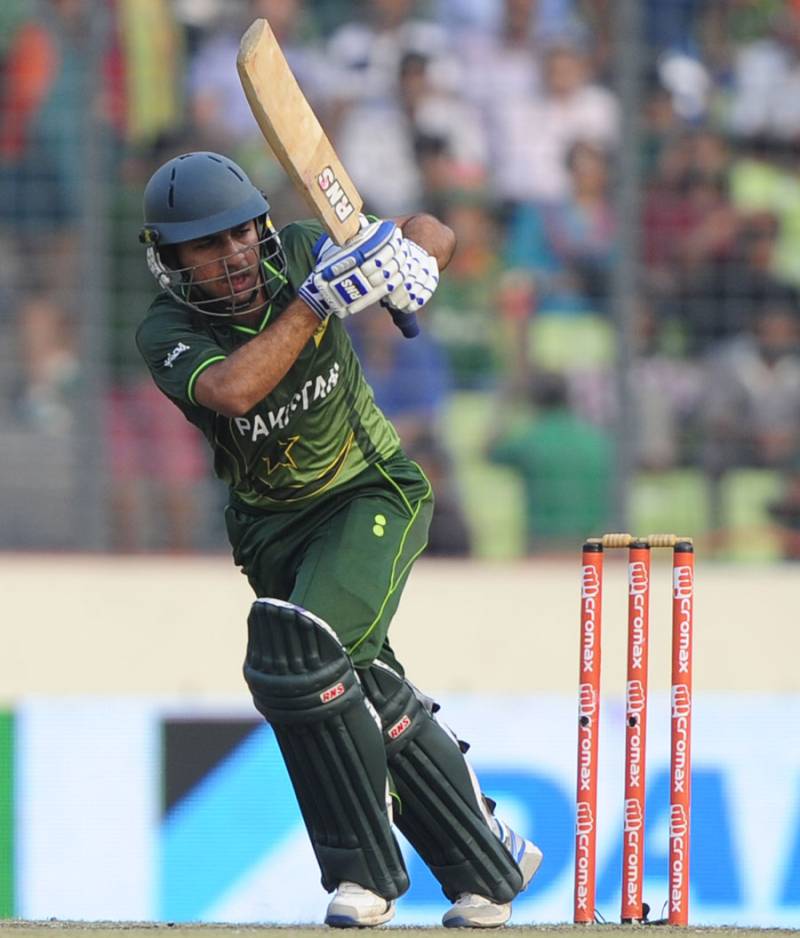 COLOMBO (Web Desk) - The discipline of Sri Lanka's seamers bore down heavily upon Pakistan, and Sarfraz Ahmed was left conjuring another revival act after another collective batting failure.

Rain interrupted play frequently, and 20 overs were lost despite play being extended till light faded, with Pakistan trailing by 69 runs, and last man Imran Khan standing with Sarfraz.

Sri Lanka's tail lasted only 3.5 overs into the morning, after which their seamers hit back with the wickets of the Pakistan openers, and the visitors slipped further with Younis Khan's run-out at the stroke of lunch.

From 45 for 3, Azhar Ali uncharacteristically countered with several boundaries to make 52, but Dhammika Prasad and Nuwan Pradeep never allowed a partnership to develop, three of them getting terminated in the 40s.

The zip and movement available to Pakistan's fast bowlers on day one was not quite there for Sri Lanka, but they made up for it with their perseverance. Prasad caused problems with his usual energetic effort combined with accuracy.

Although he and Suranga Lakmal were taken for a few runs when they pitched it up, they also kept testing the batsmen, as did Nuwan Pradeep's greater control and shorter lengths.

It was the bustling Prasad who produced the breakthrough, hitting Shan Masood full on the boot in the ninth over, and appealing loud and long enough to convince umpire Ian Gould. Replays showed umpire's call for both point of impact on the boot and on the stumps.

With Lakmal hit for a few boundaries by Ahmed Shehzad, Pradeep was brought on and struck with his third delivery, his tight line confusing Shehzad, who edged behind in trying to leave one too late.

Angelo Mathews then came on himself and squeezed the runs further, with only four coming in six overs after Shehzad's fall. Younis was looking comfortable with his defence, but the lack of runs made him push for a tight single in the last over of the session, and Kaushal Silva found his mark from short midwicket.

Runs came much quicker after the interval. Sri Lanka tried bowling full searching for swing. It wasn't alarming movement, and Azhar picked up fours regularly through the off side. Mathews positioned deep point soon, but Azhar was able to place it wide of the fielder on occasion.

The hosts then tried banging it short from round the stumps, especially to Asad Shafiq, but the pair survived till a 20-minute rain delay. Facing his first ball upon resumption from Prasad, Shafiq was caught on the crease to a length ball that came in.

Azhar kept counter-attacking and Sarfraz was anyway going to play his shots, a top-edged hook falling safely behind square off Prasad, before another shower arrived and forced tea to be taken.

Pradeep, who had bowled superbly without enough reward, got two in quick succession after tea. Azhar had prospered on the drive, and he fell by it, nicking Pradeep to second slip.

It was a proper crisis by now at 135 for 5 and in walked Misbah-ul-Haq, batting down the order due to a groin strain. He lasted 17 balls, Pradeep suddenly going wide of the crease and angling one full to strike the pad.

Yet again, it was Sarfraz who stepped up. He had been loose when he came in, but applied himself after tea. Of course, his style of batting meant the score kept moving. Calculated drives were hit through the off side, singles and twos were picked square both sides of the wicket.

His confidence rubbed off on Yasir Shah, who hit some meaty strokes in an eighth-wicket stand of 45.

There was not much of a role for the offspinner Tharindu Kaushal till later in the innings, when he nailed a couple of tailenders lbw.

In the morning, Yasir Shah took his wicket-tally for the series to 22, and became only the second visiting bowler after Shane Warne to take three five-fors in a Test series in Sri Lanka, when he ended the hosts' innings by trapping Pradeep lbw.