Is Meghan Markle no longer friends with Priyanka Chopra? 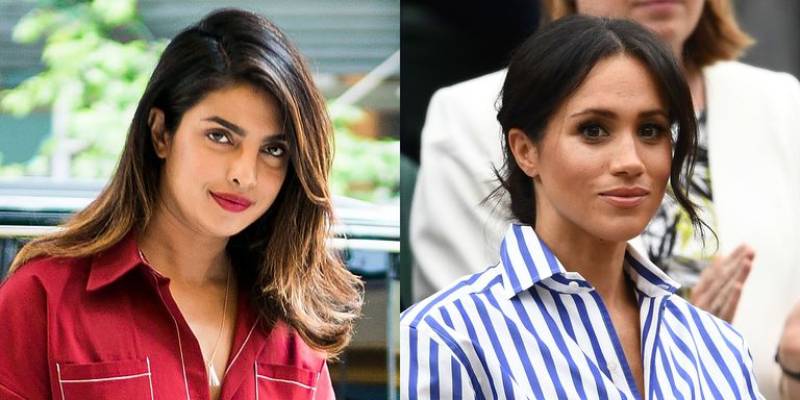 LONDON - The intercultural friendship between Bollywood star Priyanka Chopra and Dutchess of Sussex Meghan Markle is maybe going to end if the international publication 'Page Six' is to be believed. The newly married Priyanka Chopra's absence at the Duchess of Sussex's baby shower in New York last month has not escaped comment and Page Six claims insider information that the 36-year-old actress was upset that Meghan did not attend Priyanka's wedding to Nick Jonas at the end of last year.

"Priyanka was crushed," a source told daily publication 'Page Six', which is why she was a no-show at the baby shower co-hosted by Serena Williams and Amal Clooney. Mrs. Nick Jonas was one of the guests at Meghan Markle's May wedding to Prince Harry.

On Wednesday, while at The Jenny McCarthy show to talk about the new season of her ABC show, Quantico, Priyanka Chopra ...

"Their friendship is over unless Meghan apologizes. Priyanka is a huge international star with a tremendous social media following. She is probably more famous worldwide than Meghan is. She feels Meghan didn't respect her and didn't respect their friendship," claimed the source.

Upon the rising the rumours of a tiff between the ladies, the media officials tried to reach Priyanka Chopra's spokesperson but he refused to comment. But the spokesperson quoted another source as saying, "There are no issues between the two women. They are friends, and anything you're being told otherwise is inaccurate and untrue."

Royal commentator Andrea Boehlke told a British news portal: "Priyanka Chopra has been mentioned, as has Misha Nonoo, the fashion designer. Lots of people to choose from."

LONDON- The Bollywood diva Priyanka Chopra is among the very few Indian people who will be attending The Royal Wedding ...

The Priyanka Chopra-Meghan Markle friendship has been documented on social media - Priyanka last gave Meghan a shout-out on Instagram when the former Suits star released a cookbook, writing: "This is everything you always stood for. Women supporting women." Priyanka also wrote an essay for Meghan when she was placed on the Time List of 100 Most Influential People and, in 2017, famously defended Meghan Markle when a talk show host characterized her just as "Prince Harry's girlfriend."

LAHORE - Priyanka Chopra and Nick Jonas tied the knot with Nick Jonas. The couple have been so in love since they met ...

Meghan 's absence at Priyanka and Nick's grand wedding in Jodhpur in December was put down to her pregnancy. "Meghan will not be going to Priyanka's wedding, especially now that she is pregnant," as published by US- Weekly.