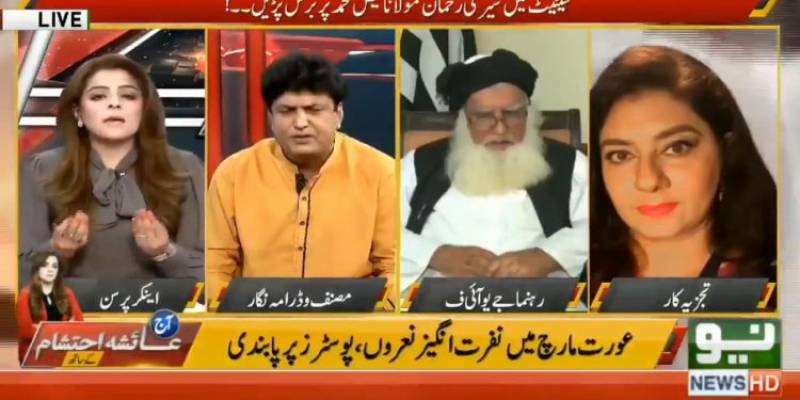 As we all know about the director’s short-tempered behaviour, he got into an abusive spat with a participant during the talk show. At first, Khalil-ur-Rehman Qamar carried on with his bit of conversation before he was interrupted by Marvi Sirmed, a former journalist.

Marvi Sirmed triggered the extremely short-tempered writer with a slogan of the upcoming Aurat March he had previously taken issue with: ‘Mera Jisam meri Marzi.’

Marvi Sirmed has a record of getting into abusive rants on television, too. Moreover, hashtags of #MeraJismMeriMarzi and #khalilurrehmanqamar is trending top on Twitter.

Senator Sherry Rehman has demanded an apology from the TV show’s management.

I will not accept any show on @NeoTv_Network until this anchor apologises and this abusive man boycotted. If others ( men and women ) do the same when asked for shows this kind of disrespect to women may not get impunity. Women’s rights are human rights. Enough of this nonsense https://t.co/YAJlmawCXF

Many showbiz celebrities were rightly shocked and dismayed at the turn of events.

This man has destroyed the gutter feminists and desi liberals and Secularism by a single sentence:
بے حیا عورت تیرے جسم پر کوئی تُھوکتا بھی نہیں 🤣
Haya is the real beauty of womenRed heart
Hats off to youRed heart#khalilurrehmanqamar pic.twitter.com/jjg1YBogVh

I am shocked at what I have just heard and seen!! Sick to the core. This same man who abused a woman on tv is revered and given project after project because of what? We are as much to blame if not more for perpetuating this thinking! #khalilurrehmanqamar

She said, “I was offered for Mere Paas Tum Ho with Humayun Saeed and Adnan Siddiqui. I did not take this project because I have issues related to women. In our society, we don’t have acceptance for women and I don’t want to represent women in a negative way. I was not able to accept that character.”

He further added that it was impossible to cast her in the play because he would have refused it outright.