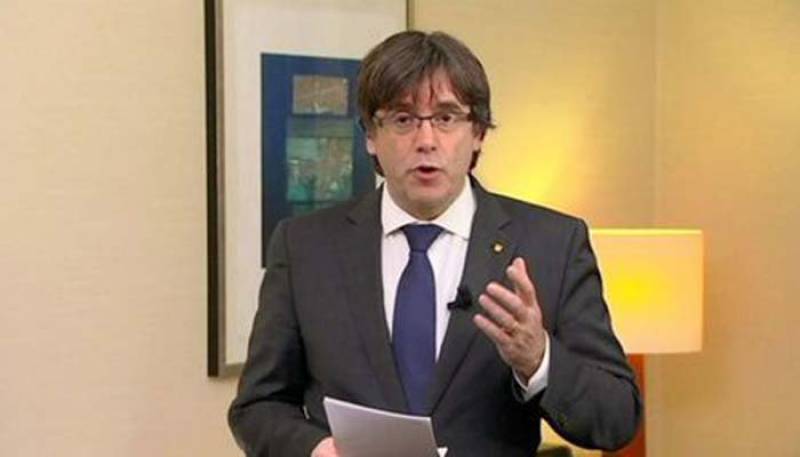 MADRID - A Spanish court has issued an EU arrest warrant for Catalan’s ousted separatist leader Carles Puigdemont, a day after he failed to show up in the court following charges of triggering independence move.

The court on Friday asked Belgium to arrest the former Catalan leader, who went Brussels after his government was sacked over an announcement of independence, and his four aides.

Madrid High Court judge also turned down a request of the 54-year-old politician to record statement through a video conference from Belgium.

The issuance of the warrants has caused anger among supporters of the separatist leader. They took to streets of north-eastern region by chanting slogans and displaying Catalan flags.

Spanish prosecutors want to try Puigdemont on the charges of sedition, rebellion, and misuse of public money.

On Thursday, the judge had sent Puigdemont's deputy and seven other deposed regional ministers to jail for their alleged involvement in the independence drive.

Puigdemont while talking to media in Brussels said that he was not escaping from “real justice” but avoiding politicised justice in Spain. He denounced the "enormous pressure and political influence on judicial power in Spain."

"I have told my lawyers to inform the Belgian justice authorities that I am completely at their disposal," he said.

Belgian prosecutors said they would review the warrant before referring it to a judge for implementation.

The legal action follows central government's Oct 27 action to dissolve the regional parliament in Catalonia and announcing new elections to be held in on December 21.

Following the Catalan parliament’s vote on Oct 27, in which it made the decision to announce the region’s independence from Spain, the government in Madrid fired the cabinet.

“We believe it is urgent to listen to Catalan citizens, to all of them, so that they can decide their future and nobody can act outside the law on their behalf,” Spanish Prime Minister Mariano Rajoy said in a televised speech.

Madrid will seek to pronounce Catalonia’s declaration of independence illegal, the official stated. Central government ministers will, in the meantime, assume the powers of the Catalan administration before the snap election.

Earlier, 70 Catalan lawmakers voted in favor of the independence declaration in a secret ballot. Ten voted against the motion, while lawmakers opposed to independence boycotted the vote. Minutes after the independence was declared by the regional parliament, the Spanish Senate approved invoking Constitutional Article 155, imposing direct Madrid rule on Catalonia.

Thousands took to the streets of Barcelona on Oct 27 as the central government appealed for calm. People gathered outside Catalonia’s parliament building, with the crowd having gone wild with excitement when the decision to declare independence was announced.