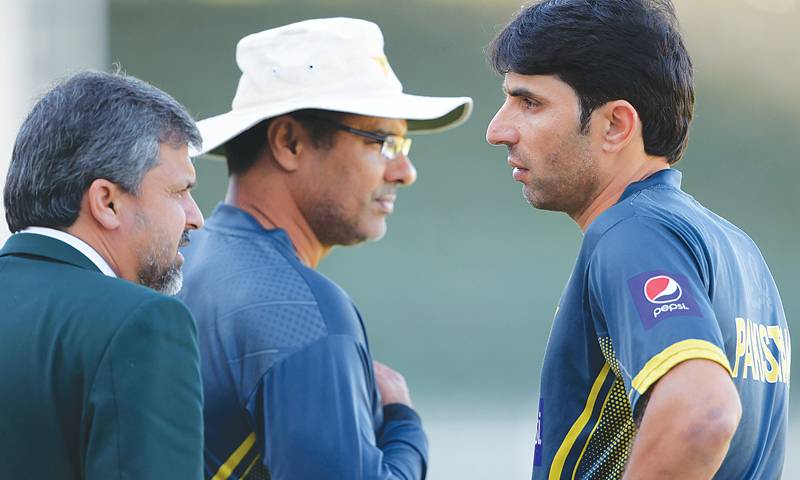 LAHORE (Web Desk) - Pakistan captain Misbah ul Haq and head coach Waqar Younis wanted the Pakistan Cricket Board (PCB) to sideline Ahmed Shehzad and Umar Akmal from the national team for at least a year to force them to improve their attitudes, a local newspaper reported on Sunday.

Misbah and Waqar in their tour reports after the World Cup stated that Shehzad and Umar refused to change their attitude and approach to cricket, the report said while quoting a TV report.

"We have told the players that Pakistan comes first," said Rasheed.

"There will be no compromise on discipline and that's why we have dropped Umar from all formats and Ahmed Shehzad from two. The PCB had decided to go with the suggestions of Misbah and Waqar and drop the two for all three formats but the national T20 captain Shahid Afridi insisted on having Shehzad in his team," the report said.

Head coach Waqar Younis had complained about Shehzad and Umar's lack of discipline during Pakistan's World Cup campaign, which ended in a quarter-final defeat to hosts and eventual champions Australia.

Umar managed just 164 runs in seven matches while Shehzad scored 222 in as many games.

Ajmal has undergone remedial work to fix his bowling action after it was ruled illegal in September and he was suspended, forcing him out of last month's World Cup.

The 37-year-old had been key to Pakistan's success in Tests, one-day internationals and Twenty20 matches before his action was reported as suspect during Pakistan's tour of Sri Lanka in August last year.

Spinning allrounder Mohammad Hafeez also returns to all three formats after missing the World Cup with a calf injury.

He too has suffered problems with his action, which was ruled illegal in December, and faces a re-test on April 9 to try to get clearance to play.

The one-day squad will be captained by Azhar Ali, replacing the now retired Misbah-ul-Haq.

Misbah continues to lead the Test side while Shahid Afridi, who also retired from one-day cricket after the World Cup, will captain the Twenty20 side.

Pakistan will play two Tests, three one-day internationals and a Twenty20 on the Bangladesh tour, with the first one-dayer starting on April 17.

Also dropped from the World Cup squad were Younis Khan and opener Nasir Jamshed, who both had disappointing tournaments, and paceman Mohammad Irfan, who is injured.