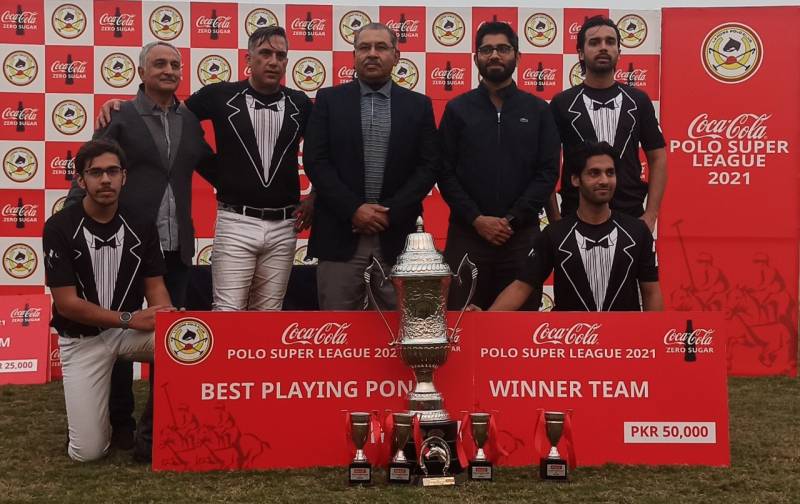 Chaudhry Hayat Mehmood played superb polo throughout the final and emerged as star from Team Zacky Farms as he hammered a hat-trick of goals while Mustafa Aziz banged in a brace and Nazar Dean Ali Khan struck one goal. From Country Lions, Ahmed Zubair Butt also played well and thrashed in three goals and Ahmed Ali Tiwana a brace but their efforts were futile in the end.

Zacky Farms started well against Country Lions as they earned a 40-yard penalty, which was successfully converted by Nazar Dean to give them 1-0 lead. They stretched their lead to 2-0 in the beginning of the second chukker, when Ch Hayat converted another 40-yard penalty. Ahmed Ali Tiwana then came to rescue the Country Lions as he fired in a field goal to reduce the margin to 2-1 before the end of the second chukker.

The third chukker was evenly poised as both the sides slammed in two goals each. Mustafa Aziz first fired in a field goal to give Zacky Farms 3-1 lead and then Ahmed Zubair and Ahmed Ali smashed in two back-to-back goals to level the score at 3-3. Just before the end of the third chukker, Ch Hayat fired in a field goal to help Zacky Farms get back 4-3 lead.

The fourth and last chukker proved to be a thrilling one, where both sides played aggressive polo and continued to attack each others’ goal. This time Country Lions started well and banged in two back-to-back goals through Ahmed Zubair to earn a hard-fought 5-4 lead. Zacky Farms also bounced back well and first they smashed in an equalizer through Ch Hayat and then smashed in a match-winning goal through Mustafa Aziz to take the final 6-5. Mark Holmes and Capt Shaukat Ali Malik supervised the final as field umpires.

General Manager Coca Cola Fahad Ashraf graced the concluding ceremony as chief guest and distributed prizes and shields among the winners and top performers. He was then presented a souvenir by Lahore Polo Club President Umar Sadik. Other notables present on the occasion were executive committee members, players and their families and polo lovers.