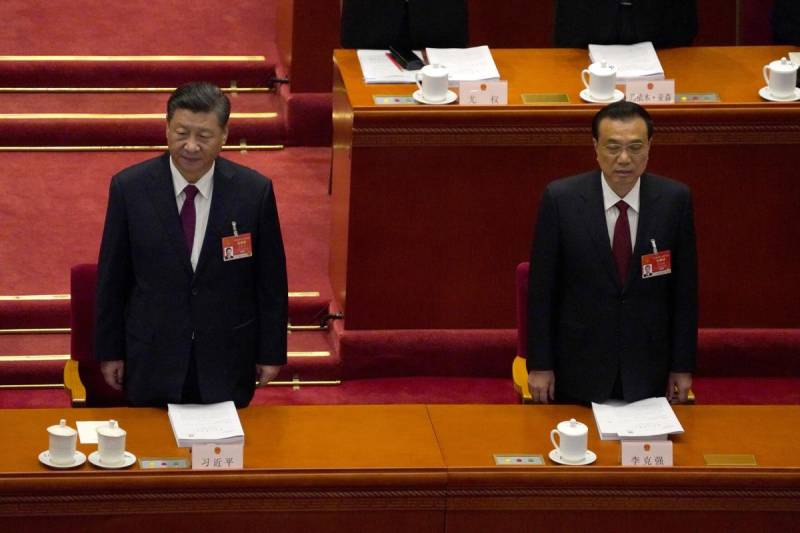 BEIJING — China’s No. 2 leaders announced a healthy economic growth target Friday and plans to make this nation self-reliant in technology amid tension with Washington and Europe over trade, Hong Kong, and human rights.

The ruling Communist Party aims for growth “over 6%” as the world's second-largest economy rebounds from the coronavirus, Premier Li Keqiang said in a speech to China’s ceremonial legislature. Some 3,000 delegates gathered for its annual two-week meeting, the year’s highest-profile political event, under intense security and anti-virus controls.

The party is shifting from fighting the virus that emerged in central China in late 2019 back to its longer-term goal of becoming a global competitor in profitable technologies including telecoms, clean energy, and electric cars.

The NPC meeting usually focuses on domestic issues but increasingly is overshadowed by geopolitics as President Xi Jinping's government pursues more assertive trade and strategic policies abroad, cracks down on dissent at home, and faces criticism over its treatment of Hong Kong and ethnic minorities.

Also Friday, the government announced a 6.8% rise in military spending to 1.4 trillion yuan ($217 billion) as China faces tension with India and other neighbors over conflicting territorial claims and ambitions to match the United States and Russia in ballistic missile, stealth fighter, and other weapons technology.

That figure in a budget report released while Li spoke is less than the double-digit increases of earlier years but outpaces economic growth and is a marked rise in real terms at a time when inflation is close to zero. Foreign analysts say total military spending is up to 40% more than the reported figure, which is the world's second-highest after the United States.

China became the only major economy to grow last year, eking out a multi-decade low 2.3% expansion after shutting down most of its industries to fight the virus. Growth accelerated to 6.5% over a year earlier in the final quarter of 2020 while the United States, Europe, and Japan struggled with renewed virus outbreaks.

Li vowed to “work faster to enhance our strategic scientific and technological capability” seen by communist leaders as a path to prosperity, strategic autonomy, and global influence. Those plans are threatened by conflicts with Washington over technology and security that prompted then-President Donald Trump to slap sanctions on companies including telecom equipment giant Huawei, China's first global tech brand.

The party sees "scientific and technological self-reliance as a strategic support for national development,” Li said.

The premier warned there are unspecified “weak links” in virus-control work and said the foundation of economic recovery “needs to be further consolidated.”

Li promised to pursue “green development” following Xi's pledge last year to ensure China’s carbon emissions peak by 2030 and to achieve carbon neutrality by 2060. That will require sharp increases in clean and renewable energy in an economy that gets 60% of its power from coal and is the world's biggest source of climate-changing industrial pollution.

“We will expedite the transition of China’s growth model to one of green development and promote both high-quality economic growth and high-standard environmental protection,” Li said. He promised to reduce carbon emissions and energy use per unit of economic output.

The premier said Beijing will “improve the relevant systems” in Hong Kong “to safeguard national security” but gave no details of possible changes in the territory, where the ruling party is tightening control following pro-democracy protests. The party used last year’s legislative session to impose a national security law on Hong Kong under which dozens of activists have been arrested.

“We will resolutely guard against and deter external forces’ interference in the affairs of Hong Kong,” the premier said.

Speculation has focused on the possibility of reassigning votes in the 1,200-member committee that selects Hong Kong leaders to exclude the small number of elected local district counselors.

Li repeated official promises to promote “peaceful growth of relations" with Taiwan but announced no initiatives toward the self-ruled island that split with the mainland in 1949 following a civil war. Beijing claims Taiwan as its territory and has threatened to invade if it tries to make its de facto independence official. Li said the mainland will “resolutely deter” any activity “seeking ‘Taiwan independence.’”

This year's legislative meeting is being held mostly by video links to keep Chinese leaders, delegates, and reports separate as an anti-virus measure. Last year's meeting was postponed from March to May due to the outbreak. The official Xinhua News Agency said the decision to stick to the schedule this year shows economic and political life is "returning to normal.”

The ruling party earlier announced it achieved its goal of doubling economic output from 2010 levels by last year, which required annual growth of 7%. Xi has talked about doubling output again by 2035, which would imply annual growth of about 5%, still among the highest for any major economy.

The ruling party’s desire for the prosperity produced by free-market competition clashes with its insistence on playing a dominant role in the economy and reducing dependence on other countries.

The premier said Beijing will encourage consumer spending on home appliances, cars, and other big-ticket items to help nurture self-sustaining economic growth and reduce reliance on exports and investment.

Beijing will promote “domestic circulation,” Li said, a reference to official pressure on industries to use more Chinese-supplied components and technology and rely less on inputs from the United States, Europe, and Asian suppliers, even when that increases costs.

That emphasis on self-reliance has fueled fears the world might split into separate U.S., Chinese, and other industrial spheres with incompatible technologies, less competition, and higher costs.

The goal of “decoupling them from foreign technology and supply chains” is “more likely to harm productivity than help it” and will make hitting the 2035 target harder, Mark Williams of Capital Economics said in a report this week.