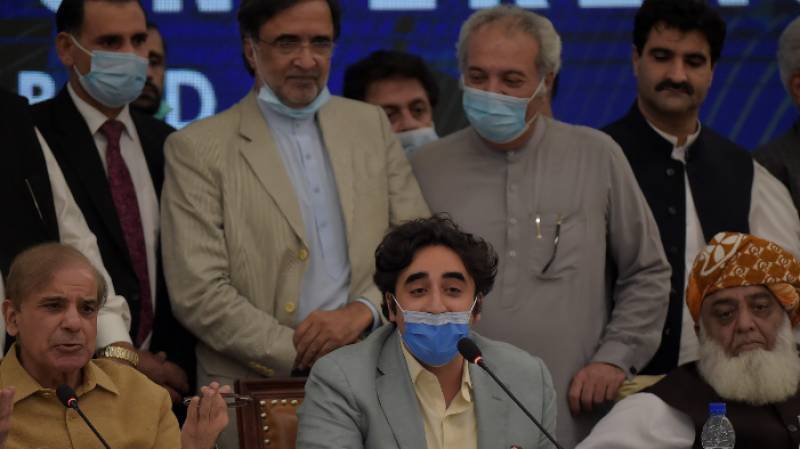 LAHORE - The 11-party opposition alliance - the Pakistan Democratic Movement (PDM) – is going through internal differences over the inclusion of the Pashtun Tahaffuz Movement (PTM).

Leaders like Jamiat Ulema-i-Islam-F chief Maulana Fazlur Rehman, who is also the PDM head, and Quetta rally host and Pakhtunkhwa Milli Awami Party chief Mehmood Khan Achakzai fear the anti-establishment party (or anti-state party, according to some observers) may diminish their influence in the Pashtun belt of Balochistan, say sources. These two parties have a considerable vote bank in Pashtuns.

The alliance, which earlier scheduled its début public show October 11 in Quetta, has deferred it until October 18.

These parties had concerns even over the presence of MNA Mohsin Dawar in the PPP-hosted All Parties Conference held in Islamabad earlier last month. Then, PPP’s Bilawal Bhutto-Zardari took a stand and invited Mr Dawar to share the stage with other leaders.

The Quetta rally is a litmus test for the PDM’s survival. The decision to defer the rally until October 18 was taken by the JUI-F and the PkMAP. JUI-F’s Senator Maulana Abdul Ghafoor Haidri says their party will host the public rally of the PDM in Quetta to be addressed by JUI-F chief Maulana Fazlur Rehman, PPP Chairman Bilawal Bhutto Zardari, PML-N’s Maryam Nawaz Sharif, Balochistan National Party’s Sardar Akhtar Mengal, Dr Abdul Malik and Mehmood Khan Achakzai. He did not name Mohsin Dawar among the likely speakers.

The PTM is observing the situation keenly, and their leaders have not reacted so far.

“If the PTM leaders are invited to the Quetta rally, it is very likely they will carry the day leaving nothing for the hosts,” said Shams Durrani, a Quetta-based journalist.

“Their presence will pull a mammoth crowd too because the faction has already arranged its shows in Quetta.”

On the other hand, the coalition partners of Jam Kamal government of Balochistan are happy over the emergence of differences in the opposition alliance.

Secretary-General of the ruling Balo­chistan Awami Party (BAP) Senator Manzoor Ahmed Kakar says the alliance will see its first show in Quetta, a huge disappointment. The media reported that the opposition parties made the alliance to save their corruption. Bilal, the chairman of the Balochistan Workers Party, said that the people of the province had rejected the PDM’s plan.

A PPP leader on the condition of anonymity said whenever they would host a PDM show in Sindh, MNA Mohsin Dawar would be among key speakers.