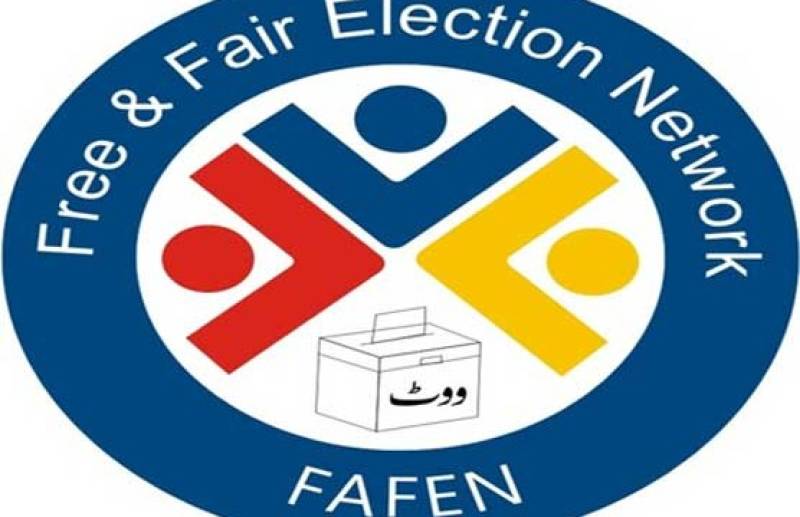 LAHORE (Online) - The third and last phase of the local government (LG) election in Punjab and Sindh was by far the most chaotic and disorderly of all the phases of LG elections in the two provinces and Islamabad, indicating the need for greater and binding powers for the Election Commission of Pakistan (ECP) to ensure that the executive enforces its legal and regulatory instructions in the letter and spirit, FAFEN said on Sunday.

They said that albeit issues with the management of results, a relatively well-organized voting process in Islamabad Capital Territory had raised expectations that the ECP would maintain standards of enforcement in the third phase in the two provinces, but the case was quite contrary.

The last minute deployment of Rangers, who were also given magisterial powers, could not ensure a smooth conduct of election in Karachi, which remained the focus of media attention throughout the day for incidences of brawls and blows among party workers.

They said that FAFEN deployed 1,043 independent, neutral and unbiased observers to observe the last phase of Local Government elections. As many as 895 (573 male, 322 female) observers were deployed in Punjab and 148 (116 male, 32 female) in Sindh to observe the Election Day processes. A Call Centre was also established at FAFEN Secretariat where 70 representatives made phone calls to the observers throughout the day and documented their findings.

Twelve TV channels were also monitored from 7.00 in the morning till 10.00 in the evening while observers visited 3,484 polling stations in Punjab and 508 in Sindh.

Despite improvements in the accreditation process, trainings and monitoring by ECP, FAFEN observers reported widespread illegalities and irregularities at 2,184 polling stations – 1952 in Punjab and 232 in Sindh – from where the information could be acquired on the Election Day.

As many as 13,045 deviations from electoral laws and rules were observed and reported by FAFEN observers who could be contacted on the Election Day, at an average of 5.9 violation per polling station. The average violations per polling station in the second phase in Punjab and Sindh was four and 5 in Islamabad Capital Territory, they added.

FAFEN officials said that some of the glaring violations continued to persist and at a wider scale included late opening of polling stations in Karachi, where 14 percent of the observed polling stations opened much later than 7:30 am as scheduled by the ECP.

Only 5 percent polling stations in Punjab opened later than the scheduled time. There were also reports of unavailability of essential polling materials such as ballots books, ballot boxes, voting stamps, indelible ink, secrecy screens and electoral rolls at less than 5 percent of polling stations. Media also reported misprinting of ballot papers in some union councils and committees.

However, one of the concerning observation was the unavailability of polling scheme with the Presiding Officers at 11% of observed polling stations in Punjab and 21% in Karachi. This might be one of the reasons that two percent of polling stations were not set up according to the polling scheme in Punjab and five percent in Karachi. Similarly, FAFEN observers reported from 17 percent of observed polling stations in Punjab and 30 percent in Karachi that voters were turned away for their names not listed on the electoral rolls. This might have caused suppression of voting and might have a substantial material effect on the outcome of the relevant union councils/committees, they said.

FAFEN officials said that one of the serious breaches of the constitutional right of voters to cast their ballot in secrecy was massively compromised in more than 50 percent of observed polling stations – 51 percent in Punjab and 57 percent in Karachi.