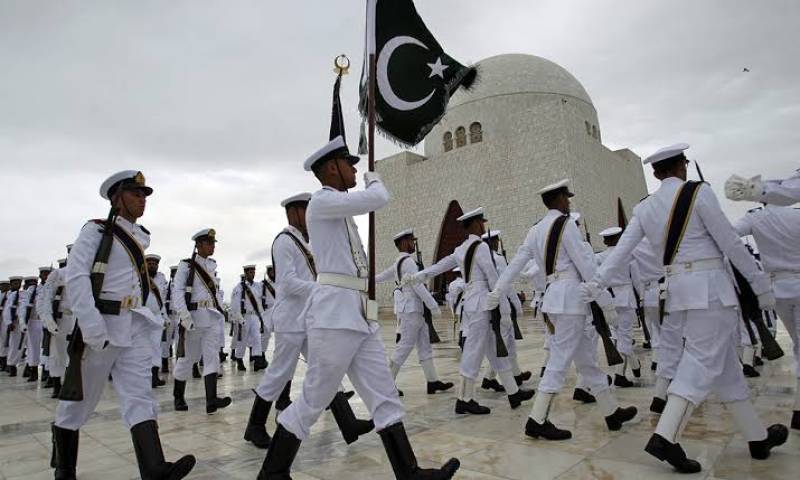 ISLAMABAD – The 56th anniversary of Navy Day is being observed today to pay tribute to the martyrs and ghazis of the 1965 Pak-Indo war.

The Navy day is observed every year on September 8 to acknowledge the sacrifices and spirit of Pakistan’s naval heroes who epitomised grit, courage and valour during the 1965 war with arch-rival India.

Sep 8 marks a golden chapter in Pakistan’s rich naval history and it also rekindles hope and pride in the new generation.

Pakistan Navy is celebrating #PakNavyDay to commemorate heroic achievements during 1965 war. Attack on Indian Radar Station at Dwarka by PN Ships (Ops Somnath) & confinement of IN Fleet in harbours due to fear of PN S/M GHAZI are glorious reminiscences of daring PN Operations. pic.twitter.com/YolrSQ3lau

Chief of the Naval Staff Admiral Muhammad Amjad Khan Niazi in his message said the Pakistan Navy Day on 8th September is a glorious reminiscence of the nation’s history celebrated every year to acknowledge the sacrifices, spirit and iconic contributions of the Naval heroes who embodied determination, courage and valour during the 1965 War.

In the early hours on September 8 1965, a Flotilla comprising seven major warships of the Pakistan Navy, in a daring operation code named 'SOMNATH', bombarded the Indian port of Dwarka.

The day also commemorates PN lone submarine Ghazi's historic achievement in 1965 which reigned supreme and remained unchallenged at sea throughout the war.

ISLAMABAD – Air Force Day is being observed with national zeal on Tuesday (September 7) to commemorate the valour ...

Pakistan Navy is unceasingly proving its mettle and has emerged as a potent naval force in the region as it proactively contributing to collaborative maritime security initiatives as a partner of international navies besides its own initiative of Regional Maritime Security Patrols (RMSP) for a secure maritime milieu in the region and beyond.