Mr Hussain Nadim is currently pursuing his PhD studies at the University of Sydney in Australia after his education at the Universities of George Washington, Oxford and Cambridge. He was recently named as one of Forbes Magazine’s global icons under 30 for his extensive contributions to the Government of Pakistan in terms of not only working as a special assistant to the Ministry of Planning, Development and Reforms but also working on the radicalization program in collaboration with the Pakistan Army and King’s College London.

HK: Mr Nadim, how does it feel like to be recognized as a Forbes global icon at such a young age?

HN: Surprisingly, it’s a very humbling experience for me that I was selected for Forbes 30 under 30 as part of global leaders in foreign policy. I am very happy to be named as part of this list as one of the only Pakistanis and a Muslim in this specific area. It kind of reassures me the path I’ve chosen for myself and I hope that it opens many doors for further innovation and work in the field allowing me the opportunity to deliver more.

HK: What are your future plans after your PhD?

HN: The future plans that I decided are pretty much the same once I got done with Cambridge and that was to work and serve the people of my country in different capacities. One of the ways I chose back when I was at Cambridge was to not only teach but also involve myself in the politics and public sector of Pakistan. I personally feel that public sector of the country needs real change and it would be the primary source of Pakistan’s progress in the future. After my PhD, I plan to go back to the public sector in Pakistan and work in any capacity that is provided to me for the betterment and progress of my country.

HK: From 2013 to 2015, you’ve worked as special assistant to Mr Ahsan Iqbal, the Federal Minister for Planning, Development and Reforms, and projects such as Vision 2025, CPEC and Civil Services Reforms were worked on under your watch. Do you feel that the goals of all these ambitious projects shall be achieved on time given the overall negative nature of our country’s politics where new governments or political instabilities overturn the achievements?

HN: When discussing about the public sector or working for reforms and new projects/initiatives, we don’t consider the fact that there are lots of frictions, reactions and inertia. The politics is usually full of this negative inertia but at the same time the art of delivery requires one to be considerate of these facts. I personally believe that Mr Ahsan Iqbal has been very proactive in terms of bringing reforms or at least talking about them and it’s only a matter of time before we start seeing the fruit of this. For instance, there was a lot of skepticism from the general public and political parties when we started working on the China-Pakistan Economic Corridor but now people are realizing its importance although there is still a controversy over the logistics of this project. Hence, we are in a better position to sort out our differences with maturity and in a better way 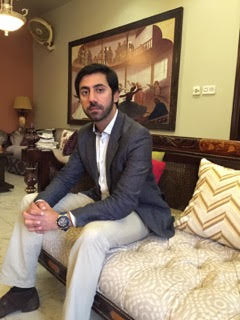 HK: In one of your previous articles, you mentioned that the civil service needs to be reformed to root out the colonial era bureaucratic hurdles. How is that even possible when the entire system is based on political influence and rote learning where deserving candidates are largely left out unlike in the United States and the United Kingdom?

HN: I agree with the two things that you talked about over here. There is one aspect that the basic intake of CSS is based on rote learning and very flowery English with a system of grading that is archaic now. The second aspect is the reform itself from the colonial heritage. Now these are the two things that need to be dealt differently under the reforms agenda. When you talk about the entrance examination of the CSS, we need to revamp the entire system by changing the learning and grading mechanisms. A very small example is that right now there is no grading key of such exams so ten different evaluators might be examining in a very different manner for the same paper. So one person might be giving 100 marks while the other person might end up failing you. We really need to standardize the grading key, the learning system and the exam itself in line with the modern mechanisms. This is something that is actually being worked upon as we speak. Regarding your point on colonial heritage, it’s based on the ‘babu’ culture or the idea that somehow civil servants are masters of those whom they are supposed to serve. This ideological perception and mentality trickled down from the British Empire and requires to be changed with civil servants reminded that they are public servants not masters. Delivery is the key to good governance, which is absent at the moment.

HK: Coming to the China-Pakistan Economic Corridor, which is also called CPEC, it’s a highly coveted project from which both China and Pakistan can benefit. However, some smaller provinces still have serious reservations on the way it’s being apparently carried out by the Ministry of Planning, Development and Reforms. How will the government manage to convince them when there is a complete mistrust given how the smaller provinces were ignored in the past?

HN: The CPEC was planned during the days of PTI dharna and KPK CM Pervaiz Khattak initially ignored our calls for negotiations on the project. Federal Minister Ahsan Iqbal tried his best keep everyone onboard and clear any misconceptions they had. This project would have started much earlier had the dharna not taken place. Now I do agree that there is a lack of information in the public regarding the specifics of the project. It had been very controversial from the start as people spread myths and also blamed the government for looking after its own interests from the project’s fortunes. These myths have been debunked now, as accusations of Punjab-oriented tilt of the project were incorrect given the fact that briefings were held amongst all four provinces and other stakeholders. Pakistan has always faced resistance on any good thing or positive step that could benefit the country. Prime examples of such resistance were those faced by Malala Yousafzai and Dr Abdus Salam who set good image for Pakistan through their contributions. This project is a fate and game changer for the country and there are both internal and external forces that are trying to influence and sabotage such a huge opportunity. It is unfortunate that the opposition and smaller parties are playing petty politics based on ethnicity and provincialism to build a propagandist election campaign on this project when facts are completely different especially regarding the corridor’s routes and energy sectors.

HK: You’ve also worked on the deradicalisation program and also work with the Australian Government on these matters. Pakistan has a deep sectarian divide for some three to four decades especially since the Zia era. How do you think it’s possible that we can reduce this sectarian divide?

HN: The matter of sectarianism is very tricky in Pakistan. Unlike Saudi Arabia, Iran or any other country in the region, Pakistan is a very interesting case of sectarianism. While we were growing up, the Sunni-Shia divide wasn’t ever there. Unlike the Arab states who had huge differences over the caliphate since the 7th Century, Pakistan remained largely peaceful and things started to go awry after the Iranian Revolution and Saudi funding for Pakistani madrasahs in the 1980s. If you look at today’s Pakistan, the majority of the areas including rural and urban ones are not much sectarian. What we actually need is the madrassa reforms through which the madrassas need to be fixed. Desperate measures will need to be taken by the government such as centralizing not only the madrassas themselves but also mosques and Friday prayer sermons. We need to ensure that state authorities duly check the sermons and madrassa curriculum. Not only this, we also need to track the money being funneled to fuel sectarianism by the proxies of external forces and not let them have the upper hand. Once we are able to sort this out then within two to three years’, sectarianism won’t be an issue for Pakistan.

HK: I’ve known you for some six years when you used to study at Oxford and Cambridge and you were critical of the Pakistani military establishment’s selective operations but how do you see this being overturned by its recent successes for maintaining peace and stability in the region which were also lauded by world leaders including French President Francis Hollande at the CHOGM Conference held in Malta last November?

HN: There are a couple of things, which I need to talk with regards to Pakistan’s operations in Waziristan as a region. I personally think that operation should be the last resort given the history. We saw in what directions the negotiations were going and once they collapsed, there was no other option left but to conduct military operations. In other words, the government and the army of Pakistan jointly gave peace a chance. The operation only happened when there was a political support and consensus for rooting out the menace of the other side. Without any political will, any military operation may have collapsed.

HK: Ok now we’re coming to the final phase of our interview in which I’ll talk about the Afghan peace process. In December 2015, the Heart of Asia Conference was held in Islamabad where global and regional powers gathered to find a peaceful solution to the Afghan debacle. However, the NDS Chief Rahmatullah Nabil resigned the very next day as President Ghani showed willingness to cooperate on full terms with Pakistan. How do you see the future course of cooperation between the ISI and NDS since Nabil vehemently opposed such cooperation and also refused to endorse a pact between the two agencies signed earlier last year?

HN: The thing is that Afghanistan is facing a major divide between President Ashraf Ghani and Abdullah Abdullah. Abdullah is being supported and heavily sponsored by the Indians. Now when such a government is divided and has a different trajectory course on the peace process, it is very difficult for Pakistan and Afghanistan to carry out the peace agenda. But the Americans are playing a very positive role over here and have realized that Pakistan is the central figure for the peace process and have given it a significant role. This doesn’t go well with the Abdullah Abdullah group including the Indians. My personal opinion is that this the one the reasons that made President Ashraf Ghani quite proactive with Pakistan and COAS General Raheel Sharif because it is his position at stake in Afghanistan. He has spent a lot of time justifying and garnering support to make Pakistan a major player in the peace process and it is Pakistan and the ISI’s responsibility to ensure that Ashraf Ghani’s peace agenda is fully supported and endorsed. However, Afghanistan also needs to sort out its own domestic political issues for the peace process to bear fruits without which it would fail.