Here’s what to recite in third Ashra of Ramazan 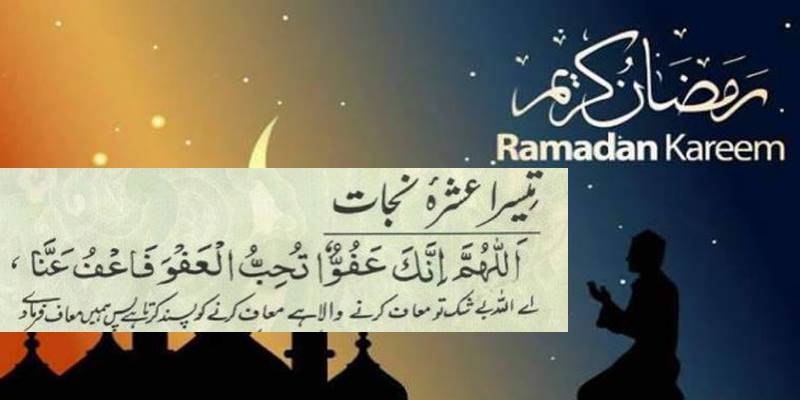 LAHORE – The month of Ramazan is one of the most beloved and blessed months in the Islamic calendar and the rewards that a Muslim can reap are countless.

The blessings of Ramazan are countless and it is divided into three parts (Ashra) of ten days each.

The three Ashra of Ramadan each comes with its own significance and the third Ashra has finally descended upon us.

Although Muslims are urged to pray whatever they want in the holy month, even then the three Ashras are specifically designated for the following;

The last Ashra comprises the vital days of Ramadan as it unveils those days that are termed as “mother of all days- Lailat-tul-Qadar” whose reward is the highest among rest of the days. Though the entire month is a blessing, yet Allah has provided Muslims with a night the last Ashra, the night of decree greater in virtue and is better than the nights of thousand months as stated in Quran.

Muslim besides zikar and recitation of Quran, do Itikaf and observe special Nawafils, Salah Tasbeeh in third Ashra for beseeching sanctuary from hell. Dua for the last Ashra is

A Muslim should invoke Allah’s mercy and forgiveness throughout the third Ashra via this dua:

Translation:  “O Allah! Save me from the Hell – Fire.”

So, 21st to 30th Ramazan is dedicated to escape hell and Muslims should strive hard to prostrate before the Almighty Allah as He is the most merciful and the most beneficent.