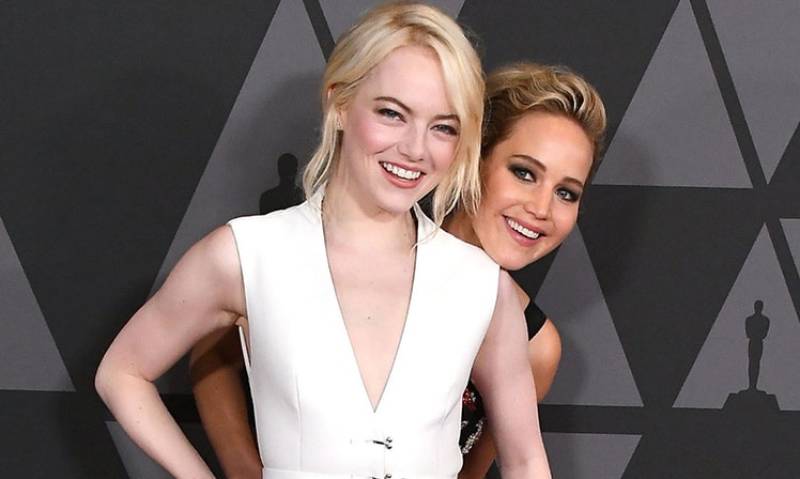 Although she wasn't nominated for an Oscar at the 90th Academy Awards, Jennifer Lawrence still came and had the time of her life at the event. Especially a particularly sweet BFF moment with La La Land actress, Emma Stone.

Lawrence playfully mocked and guffawed at her friend when Jimmy Kimmel spoke of the epic Best Picture mix-up when instead of Moonlight, La La Land was called out. Kimmel's opening monologue poked fun at the entire ordeal when he said, “This year, when you hear your name called, don’t get up right away. Just give us a minute. We don’t want another thing."

Emma, although at the center of the joke, was seen suppressing a smile while Lawrence laughed up a storm and pointed at her. The internet however, loved this sweet exchange and GIFS of the scene have been making rounds online.

Many people tweeted discussing how cute this was;

jennifer lawrence & emma stone being adorable at the #Oscars pic.twitter.com/4lXzvPLomC

EMMA STONE AND JENNIFER LAWRENCE ARE SITTING TOGETHER #Oscars pic.twitter.com/p6fQFltnUC

"Jennifer Lawrence laughing at Emma Stone is everything #Oscars"

Jennifer Lawrence laughing at Emma Stone is everything #Oscars pic.twitter.com/oQEQUcH50c