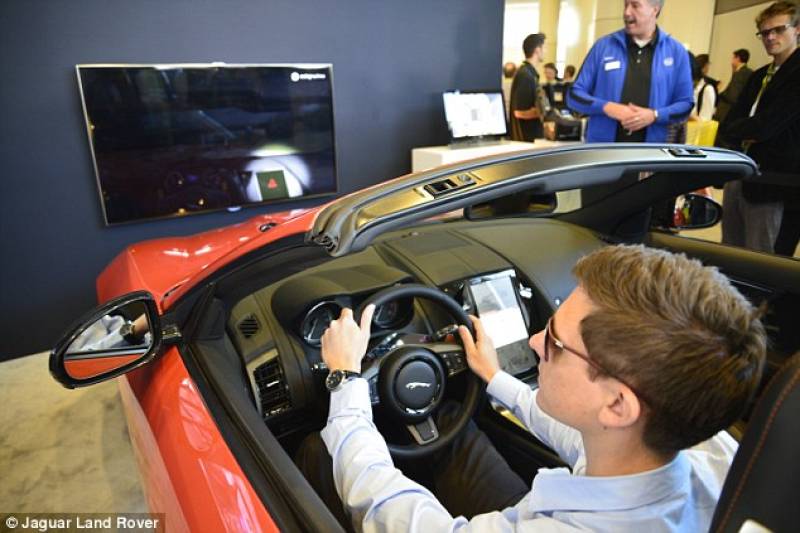 Jaguar has already unveiled plans for eye-tracking cameras that can prevent you from falling asleep at the wheel.

And now its latest patent wants to use this futuristic technology to control a car's window wipers.

It details a system in which every time the driver looks in their rear-view mirror the wipers on the rear window are activated automatically.

However, the filing hints that it could potentially work with wipers on the front windscreen too.

The patent, called 'Windscreen clearing system for a vehicle', was filed by Jaguar Land Rover (JLR) in March 2013 and awarded this week. It was originally spotted by Gizmag.

'A problem with [this] system is that, when a driver decides to observe the environment behind the vehicle by looking through the rear windscreen, typically using a rear-view mirror, the rear windscreen may not be wiped and may be obscured.

'It is against this background that the present invention has been conceived.'

It is likely to take advantage of the eye-tracking Driver Monitor System (DMS) JLR announced in January.

JLR, with support from Intel and Seeing Machines, has developed sensing technology that monitors the driver's face and eyes to reduce distracted and drowsy driving.

They demonstrated it using a Jaguar F-Type prototype at this year's Consumer Electronics Show in Las Vegas.

DMS uses attention-monitoring sensors in the dashboard to detect eye and facial movements so it can identify if the driver has become inattentive, either due to drowsiness or distraction.

JLR said: 'It is so sophisticated it can understand the state of the driver in real world conditions, including bright sunlight and if the driver is wearing glasses or sunglasses.'

JLR is also researching a next-generation heads-up display that could use the full width of the windscreen.

The idea is to present information to the driver without them having to take their eyes off the road.

Vauxhall is looking to develop similar technology that uses eye-tracking to control a car's headlights.

In March the company revealed it is developing technology that will automatically adjust the direction and intensity of headlights to match the driver's gaze.

The system uses an in-car camera that focuses on the drivers head while infrared sensors detect movement and calculate the motorist's line of sight.

Vauxhall's system uses a central camera and peripheral infrared sensors that scan the driver's eyes more than 50 times per second in dusk and night-time conditions.

The headlights adjust to match the driver's gaze both vertically and horizontally.

Even if the driver is momentarily distracted and takes their eyes of the road, the lights will continue illuminating in the direction of travel.

This will be combined with sensors outside the car that will detect daylight levels, turning on the headlights automatically when the vehicle enters a tunnel.

Vauxhall said the lights will also adjust to different road and weather conditions.