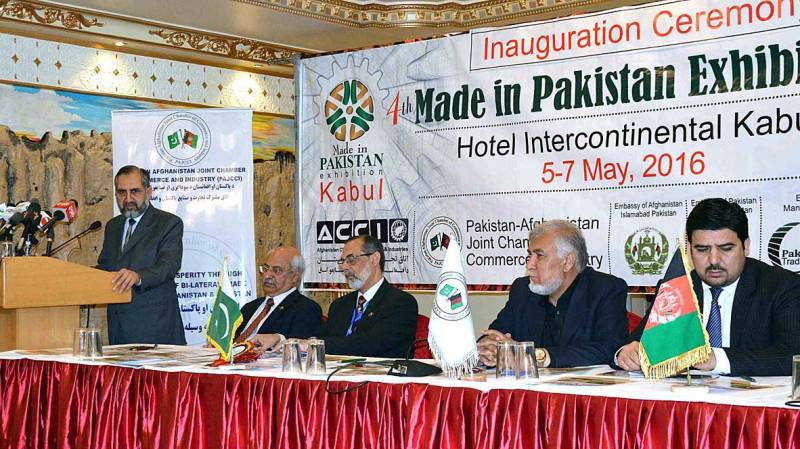 Addressing the inaugural session of 4th “Made in Pakistan Exhibition” in Kabul, he said that Pakistan is the largest and most important trade partner of Afghanistan and efforts were being made to enhance the bilateral trade volume from the existing US$ 2 billion to 5 billion in the near future.

Ambassador Hussain highlighted the need to forge a comprehensive Pak-Afghan partnership based on mutual trust and confidence. He stated that Pakistan accorded utmost significance to its ties with Afghanistan as both countries shared similar culture, history and religion. He felt that strong trade links between the two countries were essential for the economic prosperity of people on both sides.

The Ambassador reiterated his government’s commitment to work for various connectivity projects in Afghanistan which would enormously benefit the people of Afghanistan as well as the entire region. He highlighted various projects by Pakistan in health, education and infrastructure sectors, particularly the Torkham-Jalalabad Highway which was near completion.

The Ambassador informed the participants that Pakistan and Afghanistan were working on railway links between Peshawar and Jalalabad, and between Chaman and Kandahar. Besides, construction of a Peshawar-Kabul Motorway was also on cards.

He went on to say that shared economic stakes would help in bringing stability to Afghanistan and the region. He said projects like the CASA-1000 Electricity Transmission Project, the TAPI gas pipeline and the China-Pakistan Economic Corridor were critical to security, stability, progress and prosperity of the region.

Afghan Deputy Minister for Commerce, Muzammil Shinwari, also spoke on the occasion and underlined the need for enhancing bilateral trade between the two countries.

Mr. Khan Jan Alokozay, Co-Chairman of Pak-Afghan Joint Chamber of Commerce, also addressed the participants, saying that both countries needed to initiate steps for the facilitation of traders.  He thanked the Embassy of Pakistan for facilitating Afghan traders and businessmen within Pakistan.

President of Rawalpindi Chamber of Commerce, Mian Humayun Parvez, also spoke on the occasion and asked the Afghan Chambers of Commerce and Industry to organize similar exhibition in Pakistan.