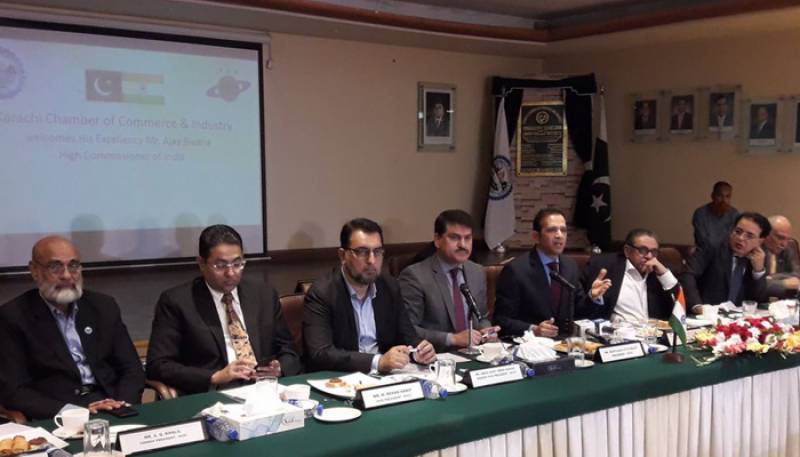 KARACHI - Indian High Commissioner to Pakistan Ajay Bisaria on Saturday said, “There is a need for taking at least small positive steps to create the environment for major decisions on different counts,” he said during an interaction with members of Karachi Chamber of Commerce and Industry (KCCI).

Moving towards this direction, India has taken a "baby" step by softening its visa policy for Pakistan's senior citizen and the children under age of 12 years and issuing visas on the humanitarian ground in some particular cases.

To a question, he said normally it took 30 to 35 days to process an application by a Pakistani for an Indian visa. However, the Indian mission here tried its best to make the process easier.

When pointing out that even Pakistani businessmen were issued India visas at the 11th hour to attend or participate any trade event, Indian High Commissioner assured that in future they would get the visa in time.

Indian envoy said he firmly believed that the neighbouring countries must have good relations with each other. "We would encourage every positive effort towards peace," he reaffirmed.

He said despite many issues/ hindrances, the bilateral trade last year figured dollars 2.2 billion. The fact is that the trade potential on both the sides was more than 30 billion dollars per year.

When his comments were sought on Indian stance on China Pakistan Economic Corridor (CPEC), he simply said his country's position was very clear on CPEC for certain reasons. However, he added, it was good to establish connectivity in the region.