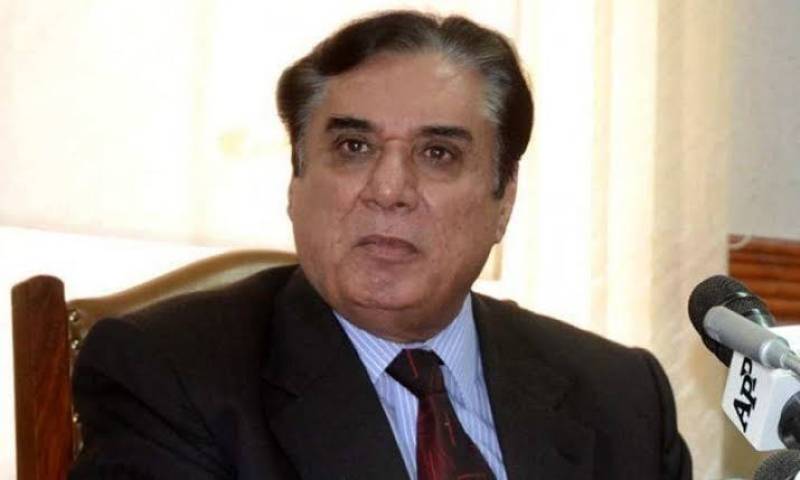 ISLAMABAD, - Chairman National Accountability Bureau (NAB) Justice Javed Iqbal said that the business community was the backbone of the country’s progress and the Bureau was ready to resolve their genuine problems.

Chairman NAB said the business community’s income and sales tax-related cases would be referred to the Federal Bureau of Revenue (FBR). NAB would not take suo moto action against bank defaulters and will refer to Banking Courts for taking appropriate action as per law, he expressed.

He said that he was ready to withdraw the cases against housing societies, if they provide the promised plots, apartments to the affectees within eight week period.

He said three main businessmen had even written appreciation letters to NAB.

History of corruption is that the father of the nation Quaid-e-Azam Muhammad Ali Jinnah said in his speech in 1947 that corruption and nepotism were the two big issues of Pakistan. Corruption plays pivotal in the downfall of any country.

The strong economy is basic ingredient for the progress of any country and a strong economy this ensures strong defence and stability in the country.

Without a strong economy, a country can never be made strong. He said that NAB is a human-friendly organization and has not authorized any tax evasion case since 2017 and no plan to do so in future also and such cases would be referred to FBR for further proceeding.

Justice Javed Iqbal said NAB never takes action against bank default cases but only State Bank under 31-D refers such cases to NAB. Action starts after the failure of a settlement between the client and the bank. He said that NAB has never taken unilateral action on bank default cases. Normally such cases sent to banking courts. NAB is not harassing any honest, law-abiding business community members, who are providing jobs to hundreds of workers and playing their active role in the development of the country as per law.

He has already constituted complaint cells in NAB headquarters and regional bureaus with the mandate to resolve traders' complaints within 48 hours period but alas not a single complaint had been received for the last five months. It was told that in case of failure, the Chairman will himself resolve the grievance of the businessmen.

He urged media to publish, air NAB related news after obtaining an official point of view of NAB and avoid speculations.

He said that NAB welcomes positive criticism in which solution of the problem will be given so that if it will be appropriate as per law would be looked into positively. A section of the press has made a habit to criticise NAB sans any cogent reason, the majority of such segments did not know NAB Ordinance/laws. A senior reporter on every mega reference pleading not guilty which is against the journalists' ethics as that section of Media could not perform the duties of the judiciary. Who is right and wrong is the only jurisdiction of the Honourable Court. The critics must read the reports of Transparency International Pakistan and World Economic Forum/Mishal Pakistan’s reports who have appreciated the performance of NAB. Spreading despondency against any institution was not a national service.

Regarding propaganda campaign against NAB, he said the people implicated in corruption cases or on NAB radar are spearheading a campaign against NAB thinking that with such tactics, NAB could retreat but it will never happen as NAB is absolutely committed to eliminating corruption with caring about consequences. NAB has set the goal of corruption elimination and this goal will be achieved at all

He said that NAB has recovered Rs 71 billion during the last 22 months period. Whereas 1,230 corruption cases involving Rs 900 billion corruption are under trial in various accountability courts. NAB takes the case to a logical conclusion after filing a reference. The reference should be decided within 30 days period as per law but some references were not decided despite the passage of three to four years. NAB would plead for the early disposal of all such cases as per law.

NAB investigates complicated white collar corruption cases which starts from Lahore, then reaches Islamabad and landed in foreign countries. Corrupt people purchase properties in countries having no agreement with Pakistan of looted money. NAB collects information from various countries about corruption through mutual legal assistance and some countries did not provide information. Information could be

He said NAB does not hurt the self esteem of suspects during investigations. A person is called in NAB with respect. NAB close a case after reviewing all aspects. A businessmen question him in Lahore that why prompt recovery was not being taken from the corrupt on pattern of Saudi Model, he said that NAB do not believe in the Saudi model.

The chairman NAB said that recess in economy could be overcome with better policies and vibrant bureaucracy. NAB has no role in recession as it has no control over dollar price fluctuation, collection of taxes, increase in taxes, activities of a stock exchange, policymaking, vibrant bureaucracy. However things are being improved, he assured.

He said that bureaucracy if work within law, sticking to PPRA and Rules of Business would have no problem at all. He said that NAB would continue endeavor of eradication of corruption to fulfill peoples expectations for corruption free Pakistan.