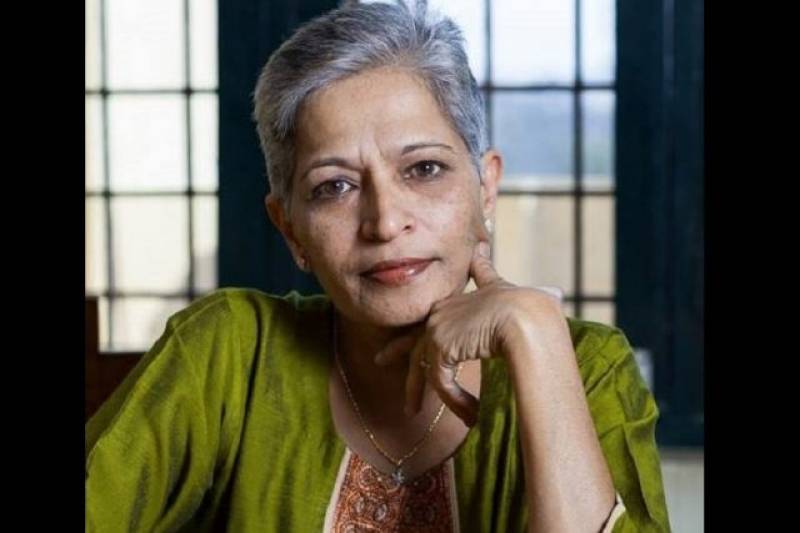 BENGALURU - Senior journalist, activist and anti-establishment voice, Gauri Lankesh, was shot dead outside her home in Bengaluru on Tuesday night.

The 55-year-old editor had stepped out of her car and opened the gates when the attackers fired at her seven times. Four bullets hit her, one in the forehead, reports Indian media on Wednesday.

Ms Lankesh was found lying on her porch by neighbours, who had first mistaken the gunshots for firecrackers. It was around 8pm and many of them were having dinner when the shots rang out.

The police are examining CCTV footage and have found four cartridges.

The attackers either followed Ms Lankesh on her way home from work or were hiding nearby, waiting for her to return. The journalist had been living alone.

There were two more similar killings in Maharashtra, that of Leftist thinker Govind Pansare in 2015 and rationalist and anti-superstition activist Narendra Dabholkar in 2013.

Ms Lankesh's killing has triggered an outpouring of grief and anger among journalists, activists and several prominent voices who described it an attempt to silence "those who believe in democracy and decency". Many protest meetings have been organised today across the country.

"Shocking and blood curdling to hear about the murder of Gauri Lankesh. These monstrous criminals must be nailed n dealt with sternly," tweeted Biocon's chairman Kiran Mazumdar Shaw.

In India we bow to frauds like Ram Rahim and kill men and women of reason & inquiry like Pansare, Dabholkar, Kalburgi & now #gaurilankesh

Ms Lankesh was the older daughter of P Lankesh - a man who brought in a new brand of Kannada journalism. She followed in his footsteps, speaking her mind and running her own Kannada paper with views that were never careful or circumspect. She was part of a group that worked for communal harmony.

Her views were considered Leftist and anti-Hindutva.

She ran the weekly 'Gauri Lankesh Patrike,' a Kannada tabloid. Like her father, Ms Lankesh weathered fierce opposition and criticism of her journalism. In November 2016, she had been found guilty of defamation in a case involving BJP MP Prahlad Joshi and had been sentenced to six months in jail. She was out on bail.