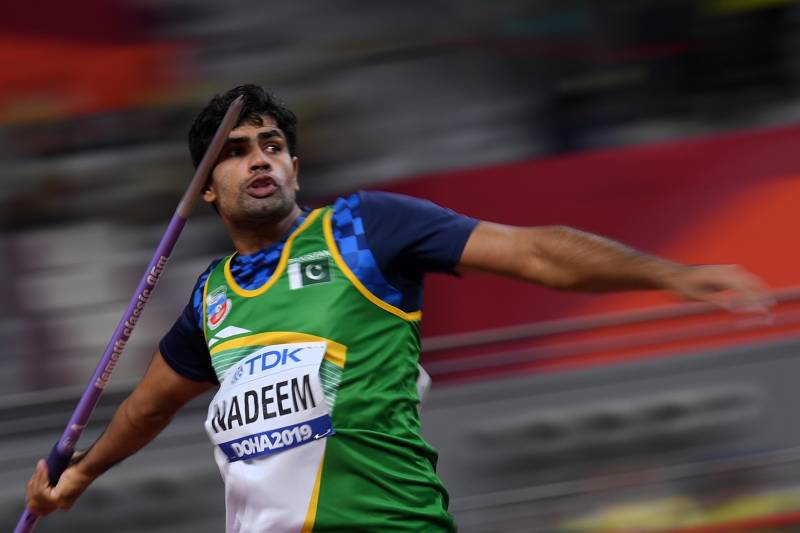 TOKYO – Pakistan's hope for winning Olympics medal ended on Saturday despite a spectacular show by Arshad Nadeem, who became the first athlete from the country to book his place in the Javelin Throw final. He earned the fifth spot in the list of finalists.

The 24-year-old started with 82.4 meters while competing in the first round at the Olympic Stadium. His second attempt went futile as he stepped over the line. He ended his third attempt with a score of 84.62, reaching the fourth spot in the list and subsequently qualified for the next round.

According to the final results, India's Neeraj Chopra won the race for the gold medal with a 87.58m javelin throw. Czech Republic's Vadlejch Jakub won the second place with a 86.67m throw and again Czech Republic's Vesely Vitezslav won the third position with a 85.44m throw.

Arshad, a gold medalist of the South Asian Games, stood among the 12 contestants who appeared in the final contest. The young athlete from a humble background was eyeing a medal.

On Wednesday, the 24-year-old qualified for the final of men’s javelin throw with a throw of 85.16m - well beyond the qualification mark of 83.50m. His first attempt was 78.50m. The first two spots were taken by India’s Neeraj Chopra (86.65m) and Germany’s Johannes Vetter (85.64m), respectively.

Earlier, the athlete from Mian Channu asked Pakistanis to remember him in prayers as he geared up to play in the final round in the javelin throw competition in the Tokyo Olympics.

Archrivals Pakistan and India faced each other in the final showdown on Saturday after a gap of 53 years as star javelin throwers, Arshad Nadeem and Neeraj Chopra, moved to the medal stage after topping their respective groups of Men's Javelin Throw.

Neeraj Chopra of #India
Vs
Arshad Nadeem of #Pakistan

for the final in men's javelin throw competition today on 7th of August.

Pakistan's Arshad Nadeem in his second attempt displayed a stunning show by a throw of 85.16m that put him on the top of the Group B qualification. The throw also placed him at the number three position in both the groups combined, behind Chopra and World no. 1 Johannes Vetter of Germany.

Javelin thrower Neeraj Chopra became the first Indian to win a gold medal at the Tokyo Olympics on Saturday.  The ...

Earlier in 1968, the two neighbouring countries faced each other in the final of an Olympic event when India defeated Pakistan in hockey.

Overall in Olympics, Pakistan has claimed a total of ten medals with eight of them won by the national men's hockey team. Pakistan hockey team, which has not been able to make a cut to the Olympics for the second consecutive time, last won the bronze medal in 1992 Barcelona.

The last Olympic medal for Pakistan was a bronze, claimed by the Hockey team at Barcelona in 1992. Before that, Boxer Hussain Shah had brought an individual medal home in 1988.