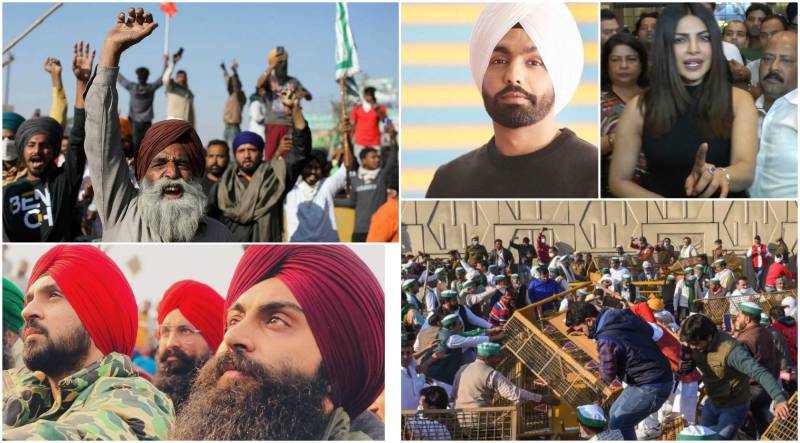 NEW DELHI – A number of Indian celebrities have been showing support for the protesting farmers as their sit-in is about to enter the third week.

Several Punjabi celebrities have been regularly posting about the protests on social media to the farmers' concerns.

These celebrities have been regularly posting about the protests on social media, requesting the Modi-led government to listen to the concerns of the protesters.

Actor Diljit Dosanjh is the latest to join the league of actors, who have extended their support to the farmers protesting against the three new farm laws brought in by the central government.

In his previous tweet, the 36-year-old had shared a collage of photos of Sukhbir Singh, an army jawan, who was a farmer's son and lost his life for the country. He requested political parties to keep their agendas aside and solve farmers' problems first.

Famous actor-singer Diljit Dosanjh has been an enthusiastic supporter of the farmers, who are protesting and currently ...

My heart goes out 2the farmers & their families protesting in the cold in this pandemic.They are the soldiers of the soil that keep our country going.I sincerely hope the talks between the farmers & govt yield positive results soon & all is resolved. #Farmerprotests #Rabrakha ???? pic.twitter.com/b7eW8p8N3P

"When tillage begins, other arts follow. The farmers, therefore, are the founders of human civilization." Daniel Webster ???????? https://t.co/26mfnHGZki

Our farmers are India’s Food Soldiers. Their fears need to be allayed. Their hopes need to be met. As a thriving democracy, we must ensure that this crises is resolved sooner than later. https://t.co/PDOD0AIeFv

Kapil Sharma took to Twitter and wrote, "The issue of farmers should be resolved by negotiating without giving it a political colour. No issue is so big that talks cannot solve it. We are all with our farmer brothers. They are our food givers."

Swara Bhasker shared the viral photo where an army jawan is hitting an elderly farmer and wrote, "The saddest thing is that this jawan also might be some farmer's son #FarmersDelhiProtest #FarmersProtests."

Singer Guru Randhawa tweeted, "Government should sit with the farmers and sort the bill. We all are from farmers families and I stand with our very own farmers. God bless our Farmers (sic)."

Government should sit with the farmers and sort the bill.
We all are from farmers families and i stand with our very own farmers 🙏

Actress Gul Panag asked if the farmers don't deserve to be heard. "Of course the #FarmerProtest is political! How else, does a section of aggrieved people put their point across in a democracy? Protests against any legislation, are inherently political. Don't they deserve a hearing from the political leadership of the country (sic)," her tweet read.

Of course the #FarmerProtest is political! How else, does a section of aggrieved people put their point across in a democracy ? Protests against any legislation, are inherently political.
Don't they deserve a hearing from the political leadership of the country?

At the moment, massive protests are erupting in Punjab and Dehli following three controversial laws - all passed by Modi’s Bharatiya Janata Party (BJP) government on Sept 20.

The first, The Farmers (Empowerment & Protection) Agreement of Price Assurance and Farm Services Bill, claims to “empower farmers for engaging with processors, wholesalers, aggregators, wholesalers, large retailers, exporters etc., on a level playing field.” It promises “price assurance to farmers even before sowing of crops.”

The second, The Essential Commodities Act (Amendment) Bill, aims to “drive up investment in cold storages and modernization of the food supply chain” and creates a “competitive market environment and also prevents wastage of agri-products that happens due to lack of storage facilities.”

And the third, the Farmers’ Produce Trade and Commerce (Promotion and Facilitation) Bill, is notionally meant to “act as a catalyst to attract private sector investment for building supply chains for the supply of Indian farm produce to national and global markets, and in agricultural infrastructure.”

Tens of thousands of farmers from the neighbouring states of Punjab and Haryana are now in a grinding standoff with Narendra Modi's Bharatiya Janata Party-led government, demanding the repeal of three market-friendly laws. Taken together, the contentious reforms will loosen rules around the sale, pricing and storage of farm produce - rules that have protected India's farmers from an unfettered free market for decades.

More than half of Indians work on farms, but farming accounts for barely a sixth of the country's GDP.

AMRITSAR – A Punjabi actor-comedian is winning hearts on both sides of the border for his hilarious but true ...