How Punjabi Indians draw a parallel between Modi and Imran (VIDEO)

Harby Sangha, who is famous for his roles in Punjabi hits like Carry on Jutta, shares hilarious joke about two prime ministers 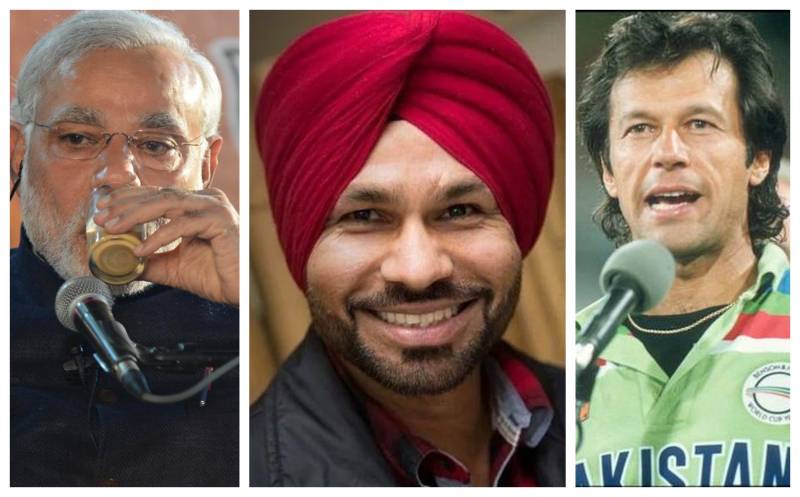 AMRITSAR – A Punjabi actor-comedian is winning hearts on both sides of the border for his hilarious but true comparison between the prime ministers of Pakistan and India.

Harby Sangha, who is famous for his supporting roles in several Pollywood productions, was addressing a gathering of thousands of farmers, most of them coming from Indian Punjab, when he described the difference between Prime Minister Imran Khan and his Indian counterpart Narender Modi, sharing a popular joke in the Indian Punjab.

“Khan came into power after winning the (1992 Cricket World) Cup for his nation while Modi occupied the highest office only by cleaning cups (a reference to Modi’s background as a tea seller).”

The 34-year-old from Jalandhar is an omnipresent character in almost all Punjabi films, famous for his expressions and punches.

Today, after almost 15-20 years of being associated with the Punjabi entertainment industry, Harby has finally got the much-deserved recognition for his roles in Naughty Jatts, Nikka Zaildar, Carry On Jatta and Laavaan Phere.

Sangha’s comments come at a time when Modi’s Bharatiya Janata Party (BJP) is being widely criticised in India and around the world for their Hindu-nationalist agenda.

At the moment, massive protests are erupting in Punjab and Dehli following three controversial laws - all passed by Modi’s Bharatiya Janata Party (BJP) government on Sept 20.

The first, The Farmers (Empowerment & Protection) Agreement of Price Assurance and Farm Services Bill, claims to “empower farmers for engaging with processors, wholesalers, aggregators, wholesalers, large retailers, exporters etc., on a level playing field.” It promises “price assurance to farmers even before sowing of crops.”

The second, The Essential Commodities Act (Amendment) Bill, aims to “drive up investment in cold storages and modernization of the food supply chain” and creates a “competitive market environment and also prevents wastage of agri-products that happens due to lack of storage facilities.”

And the third, the Farmers’ Produce Trade and Commerce (Promotion and Facilitation) Bill, is notionally meant to “act as a catalyst to attract private sector investment for building supply chains for the supply of Indian farm produce to national and global markets, and in agricultural infrastructure.”

Also in IIOJK, Narendra Modi-led fascist Indian government imposed new laws that allow the Indian citizens to own land in the occupied territory.

Since last year, after the Bharatiya Janata Party-led government abrogated Article 370 of the Indian constitution — which repealed occupied Kashmir's special status — New Delhi has made several changes in laws pertaining to the occupied territory, granting non-residents the right to get education, jobs and buy property in the region.

Indian government’s nefarious design is part of Modi regime’s plans to convert Muslim majority into a minority by settling Indian Hindus in the territory.