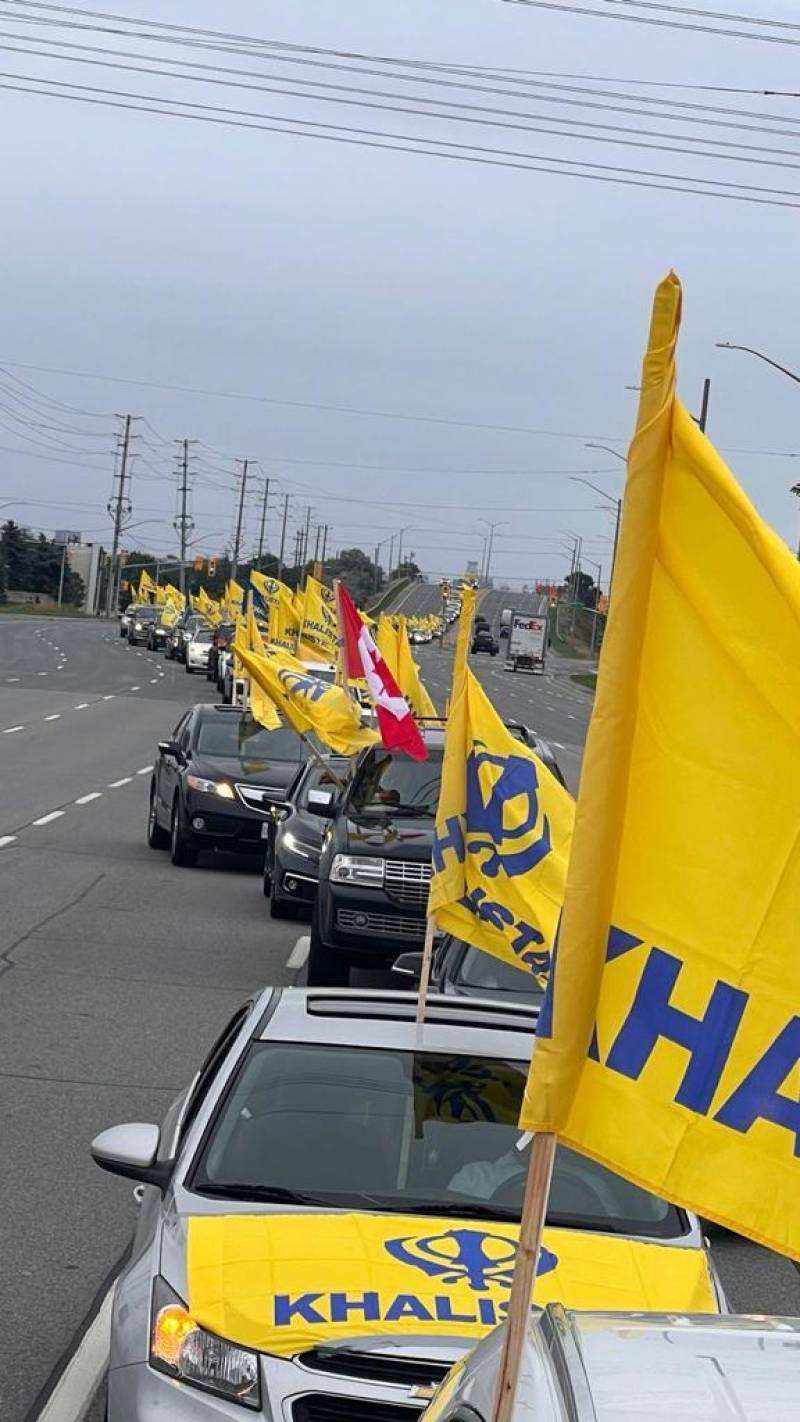 TORONTO – Canadian Sikhs have registered a new record in support of the Khalistan movement by taking out a car rally that stretched to several kilometres, consisting of over 2000 vehicles including cars and iconic Canadian trucks.

The Khalistan Referendum voting will be held on September 18 at Gore Meadows Recreation Centre in Brampton but the large-scale activity has already started in full swing.

Videos that have gone viral show a large queue of cars decorated with thousands of Khalistan flags from Malton, Ontario, in support of Khalistan and the upcoming Khalistan Referendum vote in Brampton. These videos show a multiple kilometres long line up of supporters of Khalistan who have come out in unique style, reminiscent of the recent Canadian truckers’ protests called “Freedom Convoy” which saw thousands of truckers coming out in their vehicles to voice their demands.

The 18 September voting has been organised by Sikhs For Justice (SFJ), an international human rights advocacy group spearheading the campaign for Sikhs’ right to self-determination.

Gurpatwant Singh Pannun, General Counsel to SFJ and its official spokesperson said the Canadian Sikhs had shown where they stand in their demand for the creation of Khalistan.

Gurpatwant Singh Pannun said: “Canadian Sikhs have made a new record by coming out in their thousands for the car rally stretched over 5 kilometres. This is a new phenomenon and the dawn of a new awakening in the third generation Sikhs born and raised in the West. It’s the Sikh youth who are now spearheading the campaign for Khalistan. The 18 September voting is several days away but the enthusiasm is unmatched. This is a nightmare for the Hindutva extremist Modi administration.”

He added: “Sikhs are asking for the right of self-determination which is one of the fundamental rights of all people guaranteed in the UN Charter; International Covenant on Civil and Political Rights (ICCPR).”

Khalistan Referendum campaign — in which Sikhs are asked to answer the question “Should Indian governed Punjab be an independent country?” — has drawn fierce opposition from New Delhi, Indian media and pro-India segments of Non-Resident Indians (NRIs).

While Indian media and NRIs have been voicing their opposition, the Indian government has been pro-actively labelling and equating the unofficial referendum on Khalistan as “terrorism” and has declared SFJ — the proponent of the referendum — as an illegal organisation under the controversial Unlawful Activities Prevention Act (UAPA) of India.

Ahead of September 18, Khalistan Referendum voting in Toronto, pro-Khalistan activists are actively holding truck rallies with Khalistan banners, plastering mega billboards, signs and distributing the promotional material at Gurdwaras in Brampton — the heavily Sikh town around Greater Toronto Area. The voting will take place in the government-owned and operated facility The Gore Meadow Community Centre, Brampton.

So far, the voting in Khalistan Referendum which started on October 31, 2021 from London, UK, has taken place in several towns across UK, Switzerland and Italy and approximately 450,000 Sikhs have cast their votes.

The Punjab Referendum Commission (PRC), a panel of non-aligned experts on referendums and direct democracy, is supervising the voting procedure to ensure transparency and compliance with international standards of balloting.

The September 18 voting centre for Khalistan Referendum in Toronto, Canada is named after Shaheed Harjinder Singh Parha to honour the young pro-Khalistan Sikh who went back to India from Canada to participate in the then ongoing armed struggle for Khalistan in the wake of the Indian Army’s June 1984 attack on the Golden Temple. In a staged police encounter, Indian forces extra-judicially killed Parha in 1988.