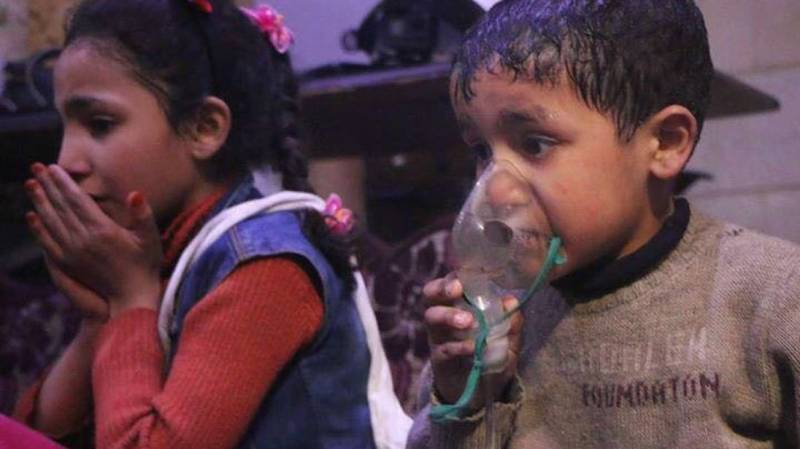 BEIRUT - Dozens of civilians, including women and children, were killed and several injured in a reported chemical gas attack on the rebel-held city of Douma in Eastern Ghouta on Saturday.

The groups, including the White Helmets, the Douma Coordination Committee and the Ghouta Media Center, claimed that toxic gas inside barrel bombs dropped by helicopters over the city caused people to suffocate and choke, CNN reported.

Syrian state media cited official source stating that the government forces had not launched any chemical attack. The official added that the reports were a "blatant attempt to hinder the army's advance" into the stronghold of rebels.

According to SANA, he further said that the army "does not need to use any chemical materials as claimed by terrorists' media affiliates."

The Union of Medical Care and Relief Organizations (UOSSM), citing doctors and activists in Syria, told media that at least 70 people were killed and 500 injured in a massive suspected chemical or poison gas attack.

The US State Department in reaction to the suspected attack said, "We continue to closely follow disturbing reports on April 7 regarding another alleged chemical weapons attack, this time targeting a hospital in Douma, Syria".

It added, "These reports, if confirmed, are horrifying and demand an immediate response by the international community".

"The United States continues to use all efforts available to hold those who use chemical weapons, in Syria and otherwise, accountable. The regime’s history of using chemical weapons against its own people is not in dispute, and in fact nearly one year ago on April 4, 2017, Assad’s forces conducted a sarin gas attack on Khan Sheikhoun, which killed approximately 100 Syrians," read the press release.

The US has called on Russia to end its support for the Syrian regime the brutal attack.

It added, "The Assad regime and its backers must be held accountable and any further attacks prevented immediately. Russia, with its unwavering support for the regime, ultimately bears responsibility for these brutal attacks, targeting of countless civilians, and the suffocation of Syria’s most vulnerable communities with chemical weapons".

The United States calls on Russia to end this unmitigated support immediately and work with the international community to prevent further, barbaric chemical weapons attacks.