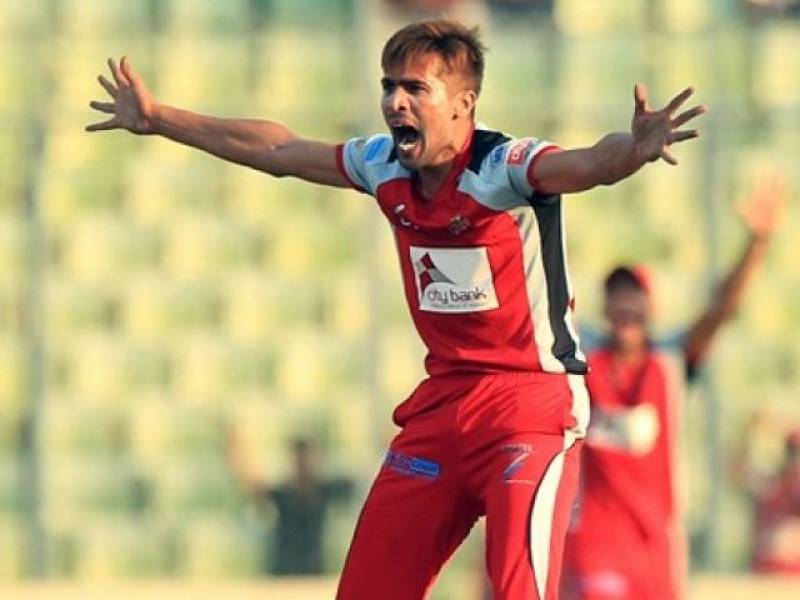 Earlier, Hafeez had refused an offer to join Amir’s team, saying he can’t share a dressing room with the person who was involved in spot-fixing.

Watch Amir’s reply to Hafeez on cricket field in this video.

According to the media reports, in current encounter, where Dhaka are currently batting first after losing the toss to Chittagong, Pakistani leg-spinner Yasir Shah and Shykat Ali opened the batting.

Both openers went back to the pavilion cheaply inside four overs.

Amir, then came on to bowl the fifth over with the Hafeez on strike. He left the first good-length ball which was pitched on the off stump. The second ball was a shorter delivery outside off again.

Hafeez tried to cut it but the bounce beat him. Third time lucky, he was able to touch the ball with his bat. A delivery on the off stump was defended towards point.

And then came the final blow. Hafeez tickled an outgoing ball to the keeper and it was curtains for the Professor. Only two players shared the limelight in that moment; an ecstatic Amir and a disappointed Hafeez!

After that Kumar Sangakkara and Mosaddek Hossain stabled the innings for the Dynamites adding 56 runs for the fifth wicket.

Amir, meanwhile, bagged two more wickets in the last over of the match.