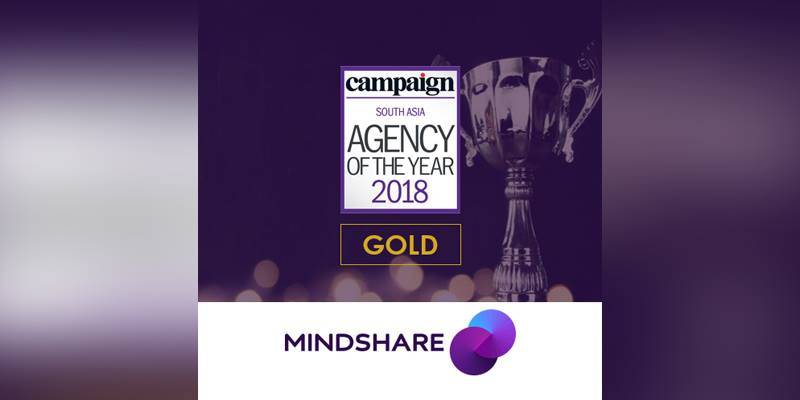 MUMBAI — The South Asia ‘Agency of the Year’ awards were held in India on 4th December, recognizing the best individual and agency talent across South Asia in the industry. The award recognized top achievers across the creative, media and activations industry spectrum. Representing the Pakistani contingent, Mindshare Pakistan received the top award, as the Gold Award winner of the Pakistani Media Agency of the Year. Innovative processes initiated and strong yearly results pushed Mindshare above its rivals as a deserving winner of the category.

Mindshare Pakistan, a subsidiary of Group M Pakistan, and owned by the Global WPP network, formally announced its operations in Pakistan back in 1999. With an elaborate and wide array of global and local clients, Mindshare is the biggest Media Agency of Pakistan.

The agency had more to celebrate later in the night, as Mindshare South Asia won the Gold in the South Asia Agency of the Year award, capping a successful year for the regional and local agencies. Among the individual awards, the South Asia Young Achiever Award featured two aspiring female Pakistanis claiming the category as Gold and Silver Award Winners. Sanober Ali Shah (Gold) and Wardia Ather (Silver), just in their mid-20s, were stepping up to positions of leadership at Mindshare Pakistan and became instrumental in executing key media campaigns and leading process reformations through the year, contributing the to the agency’s successes during that time.

“We at Mindshare are committed to pushing boundaries. We strive for the unachievable, and that is what sets us apart from our competition. Our teams are interweaved in a closely knit network, which paves way for collaboration. That is where our best work comes from. Most importantly it is our Clients and Partners that enabled us, trusted us and vouched for us. We share this win with them equally,” said Agha Zohaib, General Manager of MindShare Pakistan.

It is particularly promising that young female talent shone through in the category, promising a change in the stereotype of Pakistan’s more patriarchal perception. However, Mindshare Pakistan’s female talent excelling isn’t a new phenomenon, with Fatima Khalid, who led the Pepsi Co. team at Mindshare, being recognized in Campaign Asia “40 Women to Watch under 40” just earlier this year.

“It is truly heartening to see both Young Achievers coming in from Mindshare Pakistan. We feel proud to have won Gold in Agency of the Year with Mindshare Pakistan, and silver with Maxus. It is humbling to have these honors making their way to the GroupM trophy cabinet.” GroupM CEO, Fouad Hussain, shared his thoughts on the success as well.

Campaign Asia proved to be a promising night for Mindshare Pakistan, and a hope that our local agencies keep delivering ha igher standard of excellence in the future!