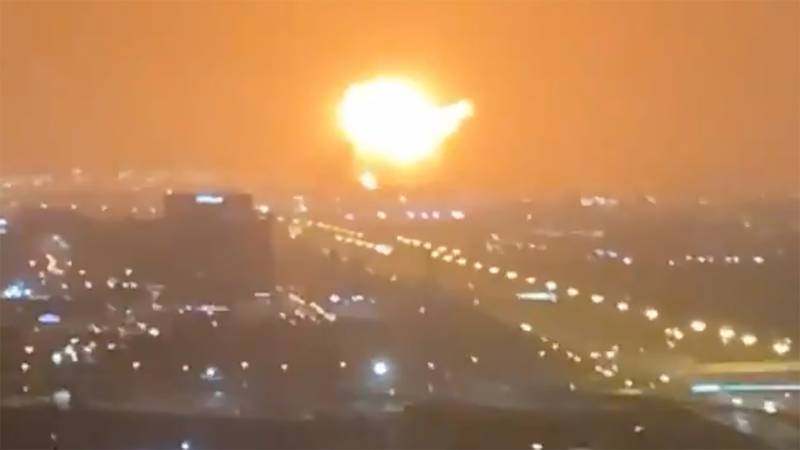 DUBAI – A massive explosion erupted on an anchored ship at Dubai’s Jebel Ali Port send tremors across the commercial hub of the United Arab Emirates.

Reports in international media suggest that the frightened residents captured the fire erupted after the fiery blast which is said to be powerful enough to be seen from space by a satellite.

The huge blaze can be seen on the vessel at the busiest port in the Middle East, as the blast triggered a shock wave in the neighbourhoods as far as 25 kilometres.

News outlets quoting officials said no casualties were reported at the site while Dubai’s civil defence teams doused the fire almost two and a half hours after the explosion. However, the damage caused by the blast to the port and surrounding cargo was not immediately revealed.

Al-Arabiya TV of KSA quoting the director-general of the Dubai Media Office reported that “the crew had evacuated in time and that the fire appeared to have started in one of the containers holding flammable material, without elaborating.” It further added that “the incident could happen anywhere in the world while the authorities are investigating the cause of the incident.”

Jebel Ali Port boasts a handling capacity of more than 22 million containers and sprawling terminals that can berth some of the world’s largest vessels.

KARACHI – CCTV footage has surfaced of the explosion at Orangi Town of the provincial capital on ...

Port officials also revealed that “they were taking all necessary measures to ensure that the normal movement of ships continues without any disruption”. The Jebel Ali Port is a vital link in the global trade network as it connects eastern and western markets.