‘I’m here live, I am not a cat’ - Lawyer tells judge after appearing with cat filter (VIDEO) 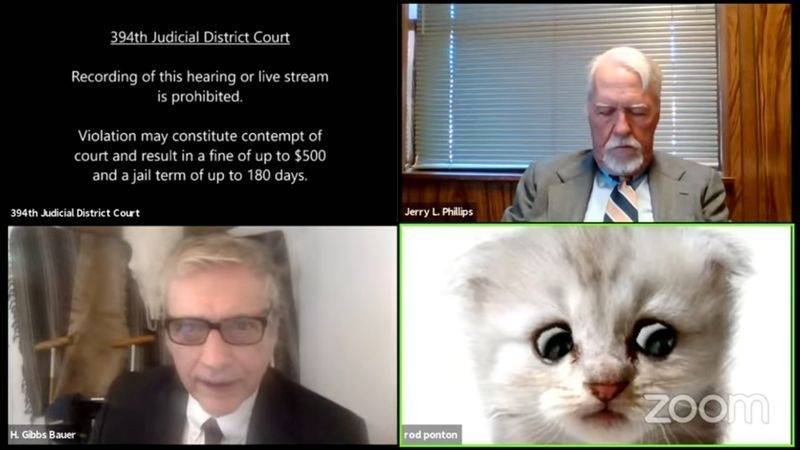 HOUSTON – A lawyer in a virtual court case popped up as a cartoon cat on Tuesday, after failing to realise that the filter was turned on.

Judge Roy Ferguson of Texas opened up virtual proceedings of the 394th Judicial District Court on videotelephony platform Zoom, but he was not expecting to see two lawyers and a ‘cat’. The filter covered the face of the county attorney Rod Ponton, who was spotted on the bottom right corner of the screen.

Judge while commenting on the ‘hilarious hearing’ said “Mr. Ponton, I believe you have changed the video setting and turned on a filter."

The embarrassed attorney explained that his assistant was trying to fix it, “I’m here live, I’m not a cat”.

As the video gets viral on social media, Ferguson wrote in a tweet: “IMPORTANT ZOOM TIP: If a child used your computer before you join a virtual hearing check the Zoom Video Options to be sure filters are off.”

IMPORTANT ZOOM TIP: If a child used your computer, before you join a virtual hearing check the Zoom Video Options to be sure filters are off. This kitten just made a formal announcement on a case in the 394th (sound on). #lawtwitter #OhNo @zoom_ushttps://t.co/I0zaj0wu6K

The attorney while speaking about the incident said, “I logged into my secretary’s computer to appear at this hearing, and when everybody’s ready the judge calls the case and everybody’s face is supposed to pop up on Zoom except mine. Mine was a cat," he added.

He further explained that the judge helped remove the filter and the hearing continued.

FLORIDA – A video of a Florida man, facing an attempted burglary charge, is making rounds on social media after ...