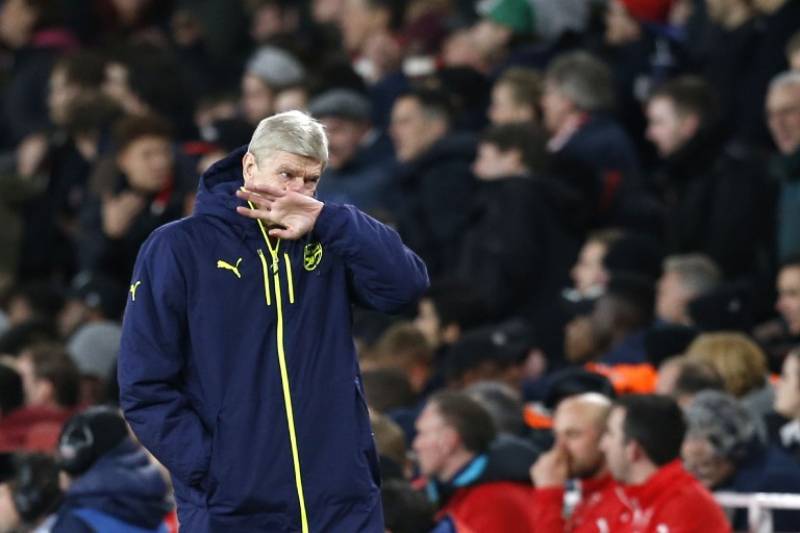 LONDON - Arsene Wenger is under unprecedented pressure to end his storied 21-year tenure as Arsenal manager following their humiliating 10-2 aggregate defeat by Bayern Munich in the Champions League.

Tuesday's abject 5-1 defeat in the second leg was preceded by a fan protest and ended in front of swathes of empty red seats at the Emirates Stadium.

Wednesday's sports headlines spoke of "humiliation" and an "all-time low", while the players who helped Wenger turn Arsenal into the superclub they are today said the time for change had finally come.

"He looks like a lost man," Ian Wright, Arsenal's second highest goalscorer, said on BT Sport. "It just seems to be mounting up. You've got the fans, the protests. It's imploding."

Though noisy, the pre-match protest was a low-key affair, attended by only around 200 fans, but the banners held and slogans chanted revealed the extent of the divisions within Arsenal's fan base over Wenger.

The protestors' banners bore messages including "ENOUGH IS ENOUGH", "STUBBORN. STALE. CLUELESS" and, in reference to the two-year deal for Wenger that is reportedly on the table, "NO NEW CONTRACT".

Some fans even chanted: "Arsene Wenger, you're killing our club!" Wenger, 67, has said he will make an announcement about his future either this month or next.

He is not thought to be under any pressure from above, with American majority shareholder Stan Kroenke said to be happy with Wenger given his repeated success in qualifying Arsenal for the Champions League.

The retiring Kroenke, known as 'Silent Stan', was also the target of protests during the rout by Bayern, angry supporters urging him to "get out of our club".-APP