Tarek Fatah gets totally destroyed by history lesson on Twitter 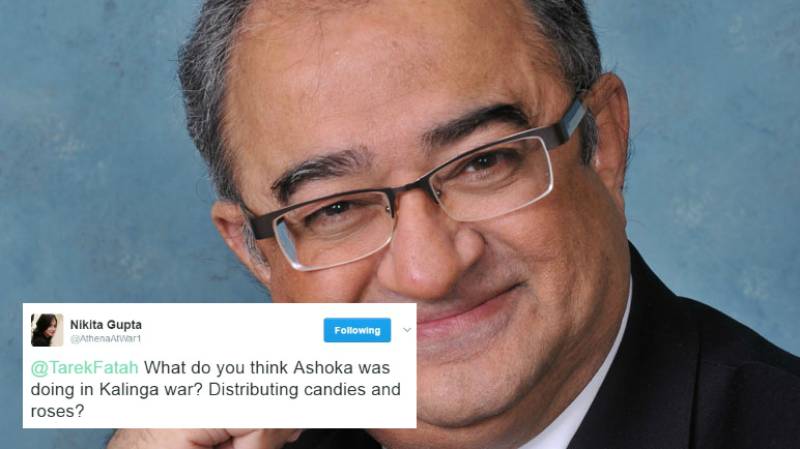 It wouldn't be an overstatement to say that Tarek Fatah's blatant distortion of history is almost an obsession with him, an ideology that he shares with extremist Hindu organisations.

Often dubbed as "Mulla in disguise", Tarek Fatah has often been called out on this 'jingoistic propaganda'.

Recently, during one of Fatah's most favourite topics of discussions, vilifying historic Muslim figures, Tarek asked an Indian girl about her beliefs regarding the violence and bloodshed caused by the Muslim invasion in India.

Really @AthenaAtWar1? Since I'm too dumb to know, could u name a Hindu invader of Hindustan? Please?

What is wrong with India's liberals? https://t.co/ZE5u5cxER4

The girl, however, responded aptly and gave a good history lesson to Fatah who boasts about his knowledge of history.

"What do you think Ashoka was doing in Kalinga war? Distributing candies and roses?" the girl quipped.

@TarekFatah What do you think Ashoka was doing in Kalinga war? Distributing candies and roses?

Tarek Fatah whose very presence on social media has been a source of galvanization of communalist sentiments also messed it up when he tweeted something to Pakistani lawyer and rights activist Jibran Nasir.

You @mJibranNasir may be proud of Hindu-hatred coupled with pride in the plunderers who raped our land Hindustan, but I am free of Ghazni. https://t.co/5szYvh2SWm

Jibran, apparently aware of Fatah's behaviour, chose to respond in the same but dignified language.

The Kalinga War was fought during the Maurya Empire under Ashoka and the state of Kalinga, a feudal republic located on the coast of the present-day Indian state of Odisha and northern parts of Andhra Pradesh.  The Kalinga war, the only major war Ashoka fought after his accession to the throne, is considered to be one of the largest and bloodiest battles in world history. Kalinga, then an independent region, put up a stiff resistance against the brutal strength of Ashoka and fought bravely till the end.

Tarek Fatah who is notorious for trolling and using indecent language is a Pakistani-born Canadian "academic" who was recently publicly beaten up during a trip to India for his allegedly hate-mongering and sectarian statements. Many Indians have also expressed their concerns over Fatah's inflammatory speeches and writings.