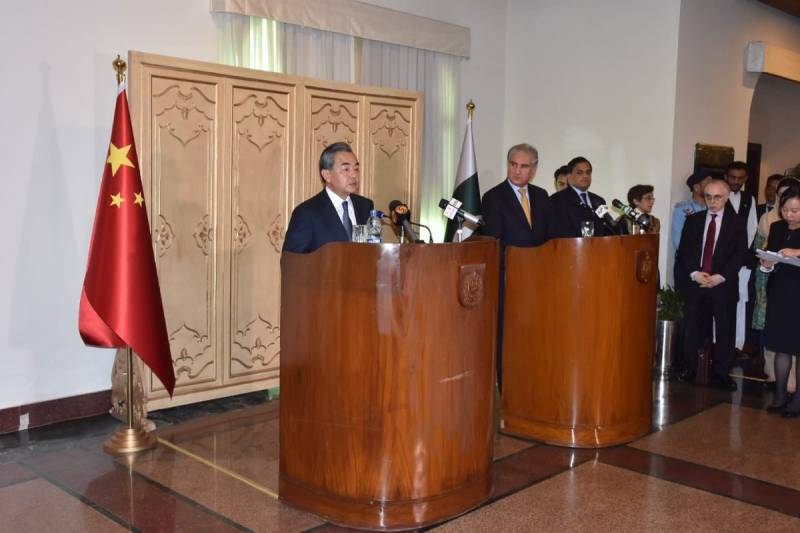 ISLAMABAD - Foreign Minister Shah Mehmood Qureshi expressed on Saturday that development of multi-billion dollars China Pakistan Economic Corridor (CPEC) was the priority of the incumbent regime and is leading to fast-paced progress.

Addressing a joint press conference with Chinese State Councilor and Foreign Minister Wang Yi at the foreign office, the minister said relations with China are an integral part of Pakistan's foreign policy.

Speaking about the delegation-level talks earlier held between the two countries, Qureshi said that bilateral relations, the regional situation, trade ties, elimination of poverty, education and creation of jobs were discussed.

Qureshi further said that the security of Chinese citizens in Pakistan will also be ensured.

The minister highlighted that Pakistan has played a key role in eliminating terrorism and China appreciates Pakistan’s sacrifices in the war against terror.

He elaborated that the purpose of the Chinese foreign minister's meeting was to increase communication with the new government.

Qureshi continued that the Chinese foreign minister has invited PM Imran to visit the country in November.

Chinese State Councilor Wang Yi also spoke on the occasion and said that Beijing wanted to strengthen relations with Islamabad.

He expressed that he had a positive meeting with his Pakistani counterpart.

The minister assured that China will continue to support Pakistan as per its foreign policy and will try to solve the challenges faced by the country.

'Pakistan has also invited Chinese premier and president to visit the country,' said the visiting dignitary.

He admitted that Pakistan fought bravely in the war against terrorism and China would continue to lend support to Islamabad in this regard.

Wang Yi also highlighted that both the countries would jointly work to restore peace in war-battered Afghanistan.