E-commerce in Pakistan expected to reach $1 billion by 2020: Khurram Dastgir 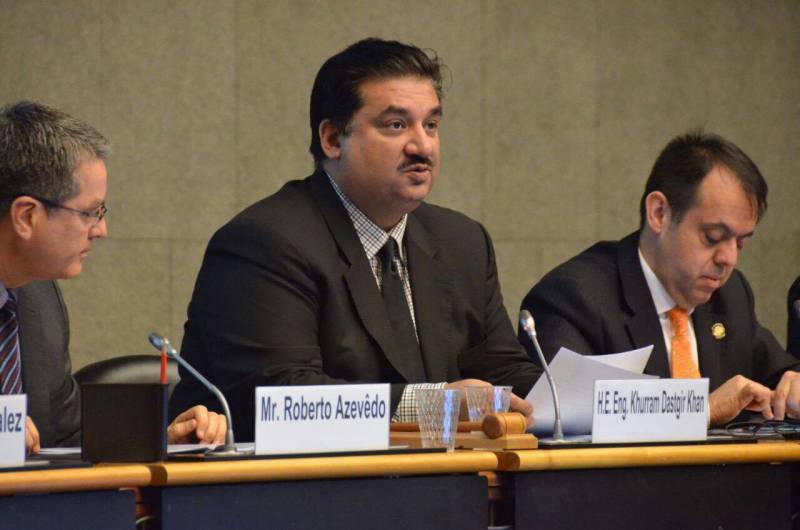 "Our legislature is working hard to update the rules and regulations governing digital trade", he said while inaugurating a Seminar on "Ecommerce for Development" in Geneva a message received here said.

Pakistan organized the seminar on "e- Commerce for Development", it was attended by large number WTO members and ambassadors.

All heads of agencies greatly appreciated the initiative taken by Pakistan.

During the seminar, Country experiences from Sri Lanka, Argentina, Nigeria, Pakistan, and ASEAN, were presented and debated.

Speaking on the occasion, Khurram Dastgir Khan said commerce was an inescapable fact of life; it has grown beyond our imagination.

The digital economy, he said has emerged as an unstoppable giant that was growing at 10 percent a year, more than triple the rate of overall global economic growth.

"Digital is no longer a part of the economy - it is becoming----the economy. Internet revolution contributes 8% of global GDP, The development of mobile broad band holds the promises to brings billions more on the line, thus narrowing the digital, economic, physical and educational divide, The internet of things or internet of everything has the potential of contributing $11 Trillion to global GDP by 2025".

The commerce minister said internet related consumption and expenditure has already surpassed the size of the global agriculture and energy sectors. But only a small proportion of this is happening in LDCs and developing countries.

He added that it was this reality which motivated our group of like-minded countries to launch, Friends of Commerce for Development. Key motivation being to narrow the knowledge gap, that exists between members in understanding and appreciating different dimensions of e-Commerce.

Khurram Dastgir said that in a national consultation held last month in Pakistan, “our stakeholders said, “we have missed the plastic phase of e-commerce revolution; we cannot afford to miss the mobile digital phase of e-commerce”. They identified efficient, frictionless and low cost payment systems and consumer trust and protection as key to E-commerce in Pakistan”, he remarked.