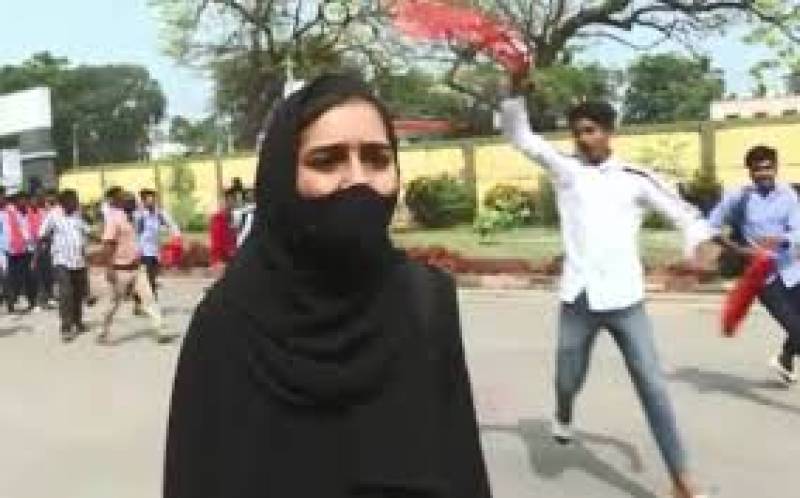 ISLAMABAD/BENGALURU – Pakistani ministers have lambasted the Modi-led Hindu national government for terrorising Muslim women in India for wearing headscarves after a saffron mob heckled a young girl outside the college in the Indian state of Karnataka.

Foreign Minister Shah Mahmood Qureshi, while condemning the Hijab ban at educational institutions in the Indian state of Karnataka, has urged the Muslims in the neighboring country to stand up for the protection of their fundamental rights.

"Oppression will continue if Indian Muslims remained silent under the Modi government," he wrote on Twitter while stressing that flag-bearers of human rights should take notice of as Muslims are being deprived of their fundamental right of education.

Depriving Muslim girls of an education is a grave violation of fundamental human rights. To deny anyone this fundamental right & terrorise them for wearing a hijab is absolutely oppressive. World must realise this is part of Indian state plan of ghettoisation of Muslims.

“Wearing Hijab is a personal choice just as any other dress citizens must be given free choice”, he wrote in a tweet.

What’s going on in #ModiEndia is terrifying, Indian Society is declining with super speed under unstable leadership. Wearing #Hujab is a personal choice just as any other dress citizens must be given free choice #AllahHuAkbar

Federal Minister for Planning, Development, Asad Umar saluted the bravery of the young Indian girl. The current situation in India highlighted the sacrifice of Jinnah and his companions who fought for us, he said.

One lone brave Muslim girl takes on the fascist Hindutva brigade. Salute her courage and her conviction. #HijabRow https://t.co/SuR1KR2gSY

The ministers' reaction comes after a clip showing a hijab-clad student being heckled by a Saffron terror at a college in Karnataka state caused outrage amid intensifying protests over the ban on headscarves.

The shameful incident also drew the ire of Indian celebrities, journalists, intellectuals and politicians, who condemned the government for taking the country to a new low.

Muskan Khan stood up against the Hindu mob who were donning saffron shawls. The brave girl confronted the boys when they tried to heckle her for Islamic code.

In an interview, she said that she was not worried or scared by them.

Vowing to remain steadfast against the extremists, the girl said that she had come to the college for submitting an assignment while the administration barred entry for wearing a hijab but she somehow made her way inside.

Muskan said education is being ruined just for a ‘piece of cloth’ in India; however, she feels safe as her friends from other religions along with police assured her safety.

Soon after her clip went viral, she was titled 'lioness', 'hero', and 'brave', on social media. Muslim organisation Jamiat Ulama-i-Hind has announced a reward of Rs 0.5 million INR for Khan for chanting 'Allah-u-Akbar' while standing against saffron terror.

The outrageous clip has sparked fury as Muslims say it is an attack on their right to practice faith as enshrined in India’s constitution.

Amid the outcry, the Indian state-run by the Modi-led Bharatiya Janata Party (BJP) announced the shutting down of educational institutions for three days. Amid rising Islamophobia, the anti-Muslim stance has galvanized fears among the minorities under the Hindu nationalist government.

Meanwhile, the Karnataka state officials claimed that all schools should follow dress codes set by management. The education minister reiterated that school dress codes had been set after reviewing court decisions from across the country to ban the hijab at educational institutions.