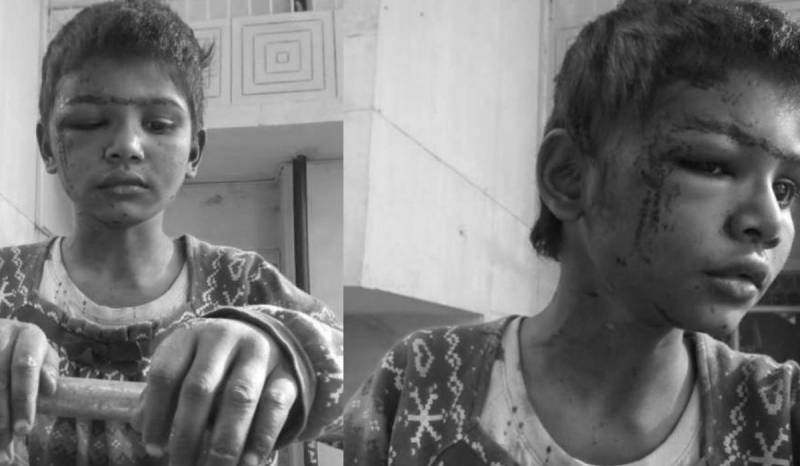 The brutal torture unleashed on 10-year-old Tayyaba for failing to repay a loan of Rs6,000 by an ostensibly educated and civilised sitting Judge reflects the deep chauvinistic mindset, sham modernism, and enlightenment that these people don't stop boasting about. The iniquitous and devilish side of these humans manifests itself when they have to behave with poor, underprivileged and helpless minors of our society.

The practice is not uncommon. In January 2016, a professor in Lahore’s Defence area; a place where the rich, educated and affluent class reside, brutally tortured and sexually assaulted his 15-year-old maid. In the same month, residents of Askari-9 in Lahore had tortured a 10-year-old girl to death. The girl was tied with ropes and was beaten to death with a plastic pipe.

In Tayyaba's case, attempts are being made to suppress the issue and family has also apparently succumbed to the pressure as the father has forgiven the Judge and reached a financial settlement. The judge's wife was granted bail for a sum of Rs30,000, a paltry amount.

However, responding to this, the Chief Justice of Pakistan took a suo motu notice of the case, the first such action he undertook after taking charge. As the matter has been brought to the Supreme Court for the first time, the legal fraternity proposes few important legal measures to prevent the culprit from being let off the hook due to his position.

Firstly, commenting on the suo motu notice, the legal fraternity demands that while the compoundable offences are being emphasised in the hearing such as torture, wrongful confinement or habeas corpus, and violation of International Labour laws, it is more important to also 'strengthen' the case by 'discerning' the neglected non-compoundable offences.

The Judge will be tried under the Pakistan Penal Code, and lawyer Asma Jahangir, who is personally pursuing the case in the Supreme Court believes that the accused, in such cases, can be also prosecuted under the child labour laws.

Along with compoundable crimes which come under section 337-A,  337 B and 337 D of PPC, here is a list of the non-compoundable offences that the legal fraternity is considering:

Regardless of what the general definition of 'terrorism' is, lawyers believe the provisions of the anti-terrorism act should also be included in the list of charges against the accused judge.

Realising the gravity of the matter and anticipating the common indifference to such matters, the legal fraternity demands that since the charges of terrorism are non-compoundable, the judge should also be charged with terrorism.

The definition of terrorism, Lawyers argue, is relative and it is the court that will ultimately decide it.

Defending the demand, solicitor at Lahore High Court and a former lawyer at Human Rights Commission of Pakistan, Humayun Faiz cited cases of Salman Taseer and Shahrukh Jatoi. In both cases, he argues, the severity of the case was intentionally intensified by including the sections of the anti-terrorism act due to the unusual nature of the cases.

Bonded labour, another non-compoundable offence, is the major argument against the accused Judge. The Judge, whether he was involved in torturing the maid, will still be liable to strict punishment by the state for employing an underage child as a maid.

Lawyers argue that these charges will prevent the judge from going unpunished and the case will serve as a long-term deterrent to the prevalent practice of torture and abuse on children.