Around 45,000 Sikhs vote in Khalistan Referendum in Italy 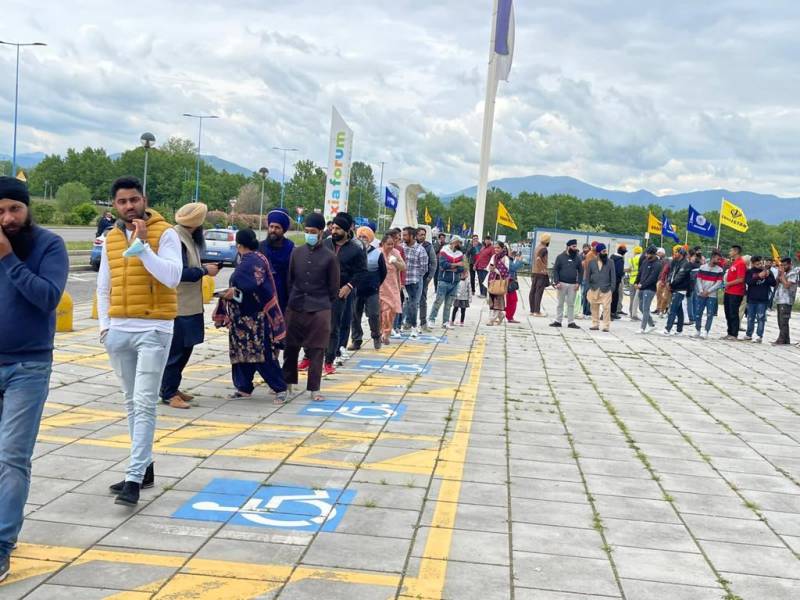 BRESCIA – Around 45,000 Sikhs have voted for Khalistan Referendum in the Italian city of Brescia for the creation of an independent Khalistan state and secession of Punjab from Indian occupation.

Sources at Sikhs For Justice (SFJ) and local Italian government and intelligence sources said that around 45,000 Sikhs attended the non biding voting called by the pro-Khalistan advocacy group Sikhs for Justice (SFJ).

Previously Sikhs in London casted around 30,000 votes in October last year and that was the largest turnout but the voting in Brescia broke that record as a historic number of Sikhs turned up for voting, beating the previous record by a double.

Most of those who attended the Brixia Forum centre were Sikh youth and a significant number included women and families. Sikhs For Justice had announced ahead of the Referendum voting that it had chosen the city of Brixia because Italy had over 200,000 Sikhs living in it with a majority in Brescia – most of them relatively young economic migrants who have come here from India and have first-hand experience of living under Indian rule.

Gurpatwant Singh Pannun, the SFJ’s General Counsel said the massive turnout in Italy is a clear message to the Modi regime that secession of Punjab from India is inevitable and Indian govt’s attempts to break the will of the Sikh people will fail.

Gurpatwant Singh Pannun said: “As per Punjab Referendum Commission’s set procedures, the voting ended at 5PM while thousands of Sikhs were held back by Italian Police. The local police played a commendable role in overseeing and controlling massive voters ready to vote in Khalistan Referendum.”

He said: “On the 5th June, Italian Sikhs once again will be able to participate in Khalistan Referendum voting that will coincide with 38th Operation Blue star anniversary when Indian army invaded Darbar Sahib and massacred thousands of innocent Sikhs. The turnout in Brescia has been outstanding.  The turnout has set a new record."

Dr Bakhshish Singh Sandhu, President Council of Khalistan, Washington DC said Sikhs have expressed their right of vote for the creation of Khalistan through their democratic voting right. “Sikhs have been coming out in their thousands to vote for the Khalistan Referendum to express their support for Khalistan. Sikhs have come out in Italy, like elsewhere, to say that they have a clear case for right to self-determination on the grounds that they have a distinct and separate religious identity and language and have been subjected to genocide by India since 1984. Sikhs have sent out a message that they reject Hindutva rule over them and will not rest till they are free.”

Dupinderjit Singh, Sikhs For Justice UK’s Coordinator said he was overjoyed at the remarkable turnout. He said: “Under UN Charter and Universal Declaration of Human Rights, Sikh people have a right to express their will through referendum on the question of continued and future association of Punjab with India but the Indian regime has attempted to criminalise those Sikhs who have spoken out against the Indian occupation of Punjab. India has registered cases against our top leadership and against hundreds of Sikhs overseas who have campaigned for Khalistan. Sikhs from Italy have sent a strong message to the anti-Sikh Indian establishment.”

Sikhs movement for Khalistan has its roots in India’s June 1984 military action – Operation Blue Star – against the Sikh Golden Temple in Amritsar in which thousands of Sikh pilgrims were massacred by the security forces and consequently resulting in the assassination of the then Prime Minister Indira Gandhi on October 31 followed by genocidal violence against Sikhs across India.

Before Italy’s phase of Khalistan Referendum, the voting in Khalistan Referendum was launched on October 31st from London UK where thousands of British Sikhs lined up to vote while Indian government unsuccessfully attempted to block the event and ran several fake news to dissuade Sikh voters from attending the referendum.