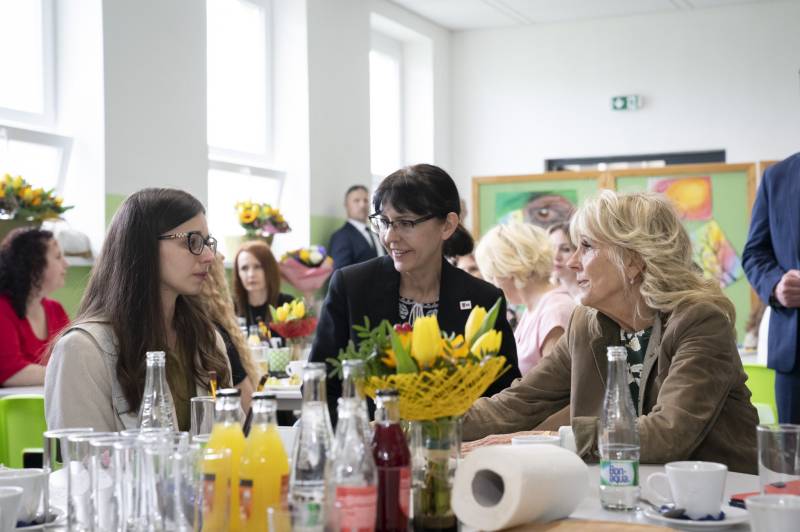 BRATISLAVA – US First Lady Jill Biden met her Ukrainian counterpart Olena Zelenska during her unannounced visit to the war-hit country on Sunday.

Biden told the reporters, “I wanted to come on Mother’s Day. I thought it was important to show the Ukrainian people that this war has to stop and this war has been brutal and that the people of the United States stand with the people of Ukraine.”

The 70-year-old expressed solidarity with the Ukrainians by wearing a large pin in the form of the blue and yellow Ukrainian flag.

On this Mother’s Day, my heart is with you, First Lady Olena Zelenska, and all of the brave and resilient mothers of Ukraine. pic.twitter.com/tCMXCXhgiY

She travelled to Ukraine from Slovakia as part of a regional tour that included Romania and was meant to be yet another display of American support for Ukraine and the countries assisting it in the wake of the Russian invasion.

Zelenska thanked Biden for her support and courageous act. “We understand what it takes for the US first lady to come here during a war when the military actions are taking place every day,” she added.

The love between a mother and child transcends all. pic.twitter.com/Umi8HksgZH

Following a closed-door meeting, the first ladies joined local children in a classroom crafting cardboard and tissue paper bears as presents for their mothers.

Biden and Zelenska both crafted their own bear, using white and yellow tissue paper.

After the trip to Ukraine, Biden returned to Slovakia.

Together, we are united for Ukraine.

I hope by being here I can convey how much their strength and resilience inspires the world, and remind them that they are not alone. 🌻 pic.twitter.com/YBqSsdw5i7

More than 810,000 Ukrainians have entered Romania since the start of the war, according to UN figures released on April 29.